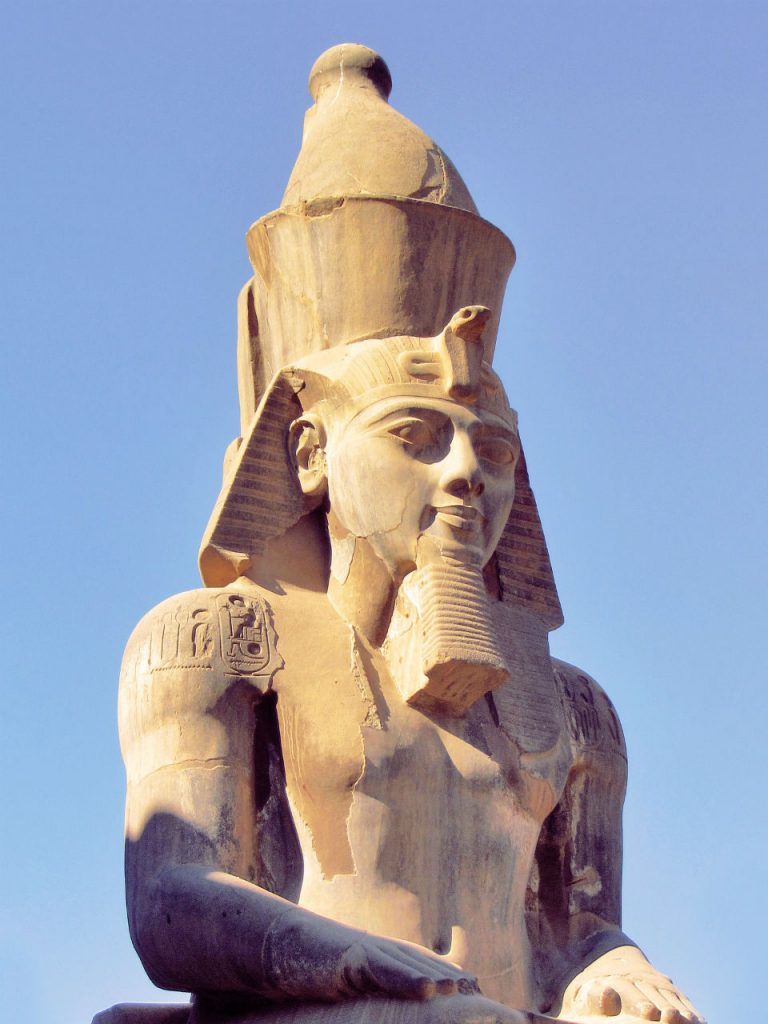 In Deuteronomy 29, towards the end of their journey, Moses reminds Israel of their experience in Egypt and wandering in the desert. “You yourselves know how we lived in Egypt and how we passed through the countries on the way here. You saw among them their detestable images and idols of wood and stone, of silver and gold. Make sure there is no man or woman, clan or tribe among you today whose heart turns away from the Lord our God to go and worship the gods of those nations; make sure there is no root among you that produces such bitter poison.” The upcoming close of the Jewish New Year and completion of a Torah reading cycle is an opportune time to review the archaeological evidence for the Israelite experience and exodus from Egypt.

Egypt’s Middle Kingdom lasted from the 21st century BCE through the 17th century BCE, and was a prosperous time for Egypt. In Genesis, Joseph is given a multi-colored coat by his father. The Beni Hasan Tomb painting shows Semitic traders from the Levant wearing multi-colored clothing, a marked contrast to the white linen clothing worn by native Egyptians. The Brooklyn Papyrus contains a list of slaves, many of whom have Semitic names, attesting to the use of slaves from the Levant in Egypt. Egypt experienced periods of turmoil, even during the Middle Kingdom, and the Ipuwer Papyrus contains imagery that is similar to the language used later in the Bible’s story of the Ten Plagues.

The collapse of the Middle Kingdom’s central authority ushered in the Second Intermediate Period and the rise of Semitic kings. A scarab with the name of a king Jacob-Baal that dates to this period was found in the area of Canaan. Egypt’s New Kingdom kings eventually expelled the Hyksos from Egypt and extended their reign into Canaan. The Egyptian king Amenhotep II recorded taking many slaves from Canaan back to Egypt. Amenhotep III defeated the Shasu of YHW, a location that may be the origin of Israel’s God, in the region of northern Arabia and southern Jordan, an area Moses was said to have crossed before he met God at the burning bush.

In the 14th century, the pharaoh Akhenaten launched a religious revolution in Egypt, restricting worship to the sun disc Aten, similar to the Bible’s idea of worshipping only one God. Akhenaten moved the Egyptian capital to Akhetaten, between Memphis and Thebes, in today’s Tel el-Amarna. The Amarna Letters found there are tablets that contain correspondences with rulers and Egyptian subjects outside of Egypt. A number of tablets contain pleas for assistance from the ruler of a town Urusalim, who was being attacked by the nomadic Habiru raiders, whose name retains a linguistic affinity to the Bible’s Hebrews.

In the 13th century, the Egyptian pharaoh Ramesses II did battle with the Hittites at Kadesh, in the region of Syria. Records of the battle show Ramesses II’s encampment. At the center of the encampment was a traveling temple, and the shrine features winged figures within its enclosure, similar to the description of Israel’s traveling tabernacle and winged cherubs. Potential sites of Ramesses II’s cities of Pithom and Ramesses were unearthed in the northeastern delta region of Egypt.

The 14th century fragmentary Berlin Pedestal contains a possible mention of a group or nation called Israel. But the late 13th century Merneptah Stele contains the earliest uncontested mention of Israel outside of the Bible. This monument seems to place Israel in the central highland of Canaan, during the reign of Merneptah and after Ramesses II’s reign.

In the transition from the Late Bronze Age to Iron Age I, a sharp population increase begins to take root in the central highlands of Canaan. These new settlers are thought to be the proto-Israelites, the early groups that came to be known as the nation Israel. These villages contain a number of unique cultural markers.

In the 13th and into the 12th century, villages with unique ‘four-room’ houses appear in the Transjordan and in the central highlands of Israel. These homes contain narrow rooms divided by pillars and a broad room running along the width of the other rooms. In the coastal regions of southwestern Canaan inhabited by the Philistines, pig bone remains demonstrate that pig was a major part of the Philistine diet. In contrast, in the central highlands and some of the Canaanite areas pig bones are not found, indicating that these new villagers did not eat pigs, a cultural trait that aligns with the biblical prohibition on eating pigs.

The pottery in these areas was unique. Whereas Philistine pottery was highly ornate, the highland settlers used pottery that was simple and undecorated. They feature a high percentage of large ‘collared rim jars,’ and few examples of imported pottery. The burial patters of these early proto-Israelites was simple, which would change over time to dedicated family burial sites.

The Manasseh Hill Country Survey undertaken by Adam Zertal indicates that the early settlers of the hill country moved in an east to west direction, the direction which the Bible indicates the Israelites traveled from Jordan into Canaan. Zertal identified a structure on Mount Ebal that he identified as Joshua’s altar, but most archaeologists would argue against assigning this structure to a specific individual.

Ultimately, what does all this mean?

There are archaeologists who argue for an exodus of Israel from Egypt, but there are disagreements about the date of this event. Some place the exodus during Egypt’s Second Intermediate Period, but this requires a revision of the generally accepted dating system. Some point to the Thera Eruption as a trigger for a tsunami that coincided with the splitting of the Reed Sea, but the odds of these two events coinciding are highly improbable. Christian biblical literalists like to place the exodus in the 15th century BCE. The problem with this view is that Egypt maintained tight control over Canaan in the 15th century, and the biblical books of Joshua and Judges that tell the story of Israel’s early years in Canaan are entirely unaware of an Egyptian presence when Israel is said to have conquered the land.

For these reasons, along with evidence mentioned above, many scholars who argue for an exodus place it in the 13th century BCE. The Merneptah Stele provides an anchor date by which Israel is already inhabiting the land in the late 13th century BCE. The sharp increase in the number of villages along with unique cultural markers argue for this being the proto-Israelites, the earliest Israelite settlers who would later come to represent the kingdom of Israel. And if the 13th century is the date of an exodus, it would likely have occurred either during the reign of Merneptah or Ramesses II, shown in the image above.