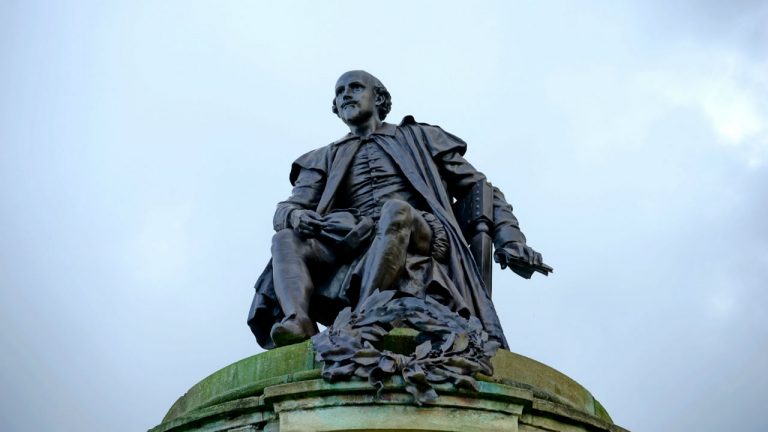 Exodus 15 is commonly referred to as the Song of the Sea.

In the biblical narrative, God split the sea, allowing the Israelites to flee the Egyptian army. The Egyptians followed but were drowned when the waters returned. Moses and the Israelites sang:

“I will sing to the Lord, for he is highly exalted. Both horse and driver he has hurled into the sea…Pharaoh’s chariots and his army he has hurled into the sea. The best of Pharaoh’s officers are drowned in the Reed Sea. The deep waters have covered them; they sank to the depths like a stone. Your right hand, Lord, was majestic in power. Your right hand, Lord, shattered the enemy. In the greatness of your majesty you threw down those who opposed you. You unleashed your burning anger, it consumed them like stubble.”

Ancient stories told in poetic form are often thought to reflect a time before literacy was widespread. The ancient Greek stories of the Illiad and Odyssey were written in a poetic form that could be more easily memorized and passed down to the generations that followed. The Old English story Beowulf was in poetic form. The same is thought of certain poems in the Bible, such as the Song of Moses in Deuteronomy 32, the Song of Deborah in Judges 5 and the Song of the Sea of Exodus 15. They were ancient and written as poems to aid in memory and transmission.

One of the notable features of the Song of the Sea that points to its antiquity is its seeming use of an archaic form of Hebrew.

Languages evolve over time. English provides a good example of this. William Shakespeare wrote in the 16th century, and while his writing can be understood today, some of its original meaning is lost on the modern reader. The oldest manuscript of Beowulf dates to the 10th century CE. Any American high school student who looks at the original on the other side of the page would realize that Beowulf’s millennium old English is utterly incomprehensible to the modern reader.

The earliest known form of Hebrew is referred to as Archaic Hebrew or Archaic Biblical Hebrew.

Outside of the Bible there are no known Hebrew inscriptions before the 11th century BCE. So scholars compared the early Hebrew to related Northwest Semitic writings of the 14th and 13th centuries BCE. In the 14th century BCE, a pharaoh by the name of Akhenaten moved the capital of Egypt to a new location he called Akhetaten, at today’s Tell el-Amarna. At Tell el-Amarna, archaeologists unearthed 14th century BCE letters written in a Northwest Semitic language that were exchanged with rulers in the Levant, in the area of Canaan and Lebanon. At Ras Shamra in Syria, archaeologists unearthed the city of Ugarit and discovered a vast trove of inscriptions from the 14th and 13th centuries BCE. These discoveries provided examples of ancient Northwest Semitic language grammar.

One example of 2nd millennium BCE Northwest Semitic language grammar and Archaic Hebrew occurs frequently in the Song of the Sea. Certain words end the letters ‘mem’ and ‘vav’ in Hebrew, referred to by scholars as the suffix -mw. In verse 15:5, “The deep waters have covered them,” it uses the unusual form ‘yekhasyumu.’ In verse 15:7, “You unleashed your burning anger, it consumed them like stubble,” it uses the word “yokhelemow,” a form that would not be found in later forms of Hebrew. Later Hebrew would not contain the suffixes -u or -ow for these words.

There is an academic debate about whether or not different forms of a language can be used to accurately date material, but for one school of thought, the “Song of the Sea” in the Bible would be the equivalent of us reading Shakespeare today.

On a lighter note, why did the pharaoh choose to pursue the Israelites after releasing them from slavery? The Egyptians were known to drink beer. Hank Williams Sr. sums it up with this exit song: