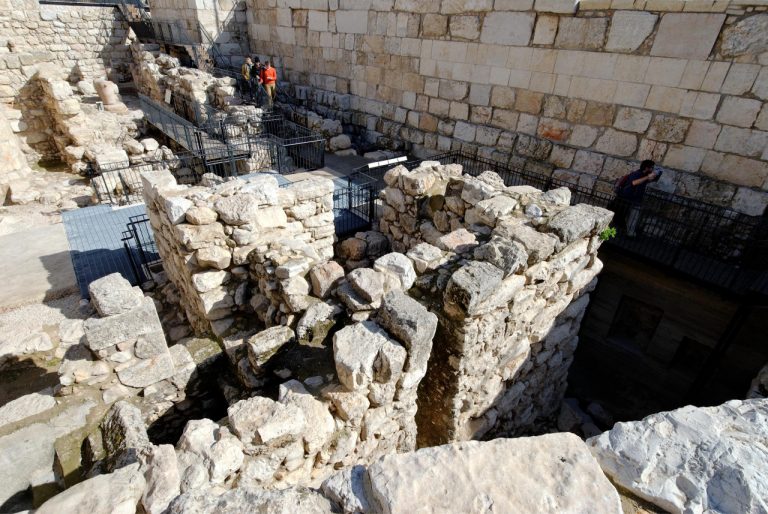 In 2 Chronicles 27, the king of Judah launched a construction project. “Jotham was twenty-five years old when he became king, and he reigned in Jerusalem sixteen years…Jotham rebuilt the Upper Gate of the temple of the Lord and did extensive work on the wall at the hill of Ophel.

The Bible does not specify where exactly the Ophel is, but it has come to be understood as referring to the hill between the City of David and the southern wall of Herod’s Temple.

Excavators working on the Ophel uncovered an ancient wall nearly 230’ long by 20’ high. The wall also had a corner tower that overlooked the Kidron Valley to the east.

In 1 Kings 3, “Solomon made an alliance with Pharaoh king of Egypt and married his daughter. He brought her to the City of David until he finished building his palace and the temple of the Lord, and the wall around Jerusalem.”

The archaeologist Eilat Mazar dated this wall in the Ophel to the 10th century BCE based on the pottery in the fill dirt, and connected the wall with King Solomon’s building program in the Bible. This would be the wall later repaired by Jotham.

For Mazar, this wall is evidence of a 10th century entity in Jerusalem capable of organizing large scale construction projects and by extension, managing a kingdom of united tribes. Other archaeologists are less sanguine, less confident about Mazar’s assertion that this wall in the Ophel is indeed that of King Solomon in the 10th century.

The image above is of a portion of the wall at the Ophel.