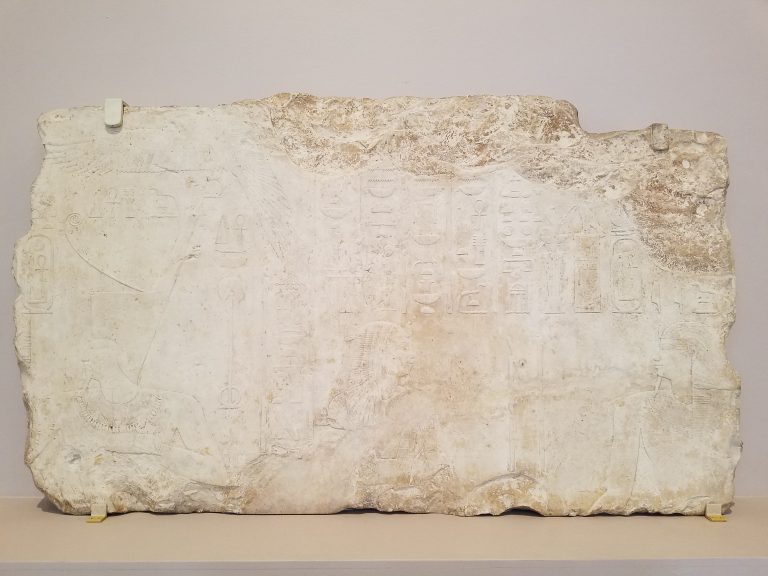 In this week’s Torah portion, God tells Abram to leave his birthplace and father’s house to go to Canaan. After Abram’s journey from Shechem in the north to the Negev in the south, Canaan was hit by famine. Abram, with his wife Sarai, continued on south to Egypt, where the plentiful waters of the Nile River helped the Egyptians avoid the drought that plagued Canaan. The Egyptians were captivated by Sarai’s beauty. The pharaoh’s officers took Sarai to to the pharaoh. As a punishment for taking Abram’s wife, God afflicted the pharaoh with plagues, so he returned Sarai back to Abram.

The Nile River begins in the highlands of East Africa, and flows northward through Egypt before emptying into the Mediterranean Sea. In ancient times, southern or Upper Egypt and northern or Lower Egypt were thought of as two distinct regions, and each was home to the capital city of Egypt at one time or another.

Within each of these periods, kings, later to be known as pharaohs, ruled. Kings ruled in dynasties, with power passing from father to son, until there was a break in the chain. In total, twenty-five dynasties ruled from the first kingdom until the end of the Third Intermediate Period.

There are a number of artifacts that list the kings of Egypt. These include the Turin Canon, Palermo Stone and Saqqara Stone. But they do not include a full breakout of kingdoms, varying periods and dynasties.

The concept of Kingdoms and Intermediate Periods is only known from Manetho, a 3rd century BCE Egyptian priest who wrote the book Aegyptiaca. The book does not survive today, but is quoted by later writers Julius Africanus, Eusebius and the Roman-era Jewish historian Flavius Josephus, in his book Against Apion.

The lists are not uniform, which complicates efforts to paint an accurate picture of Egypt’s rulers over time. The Bible also does not mention the name of the Egyptian king who took Sarai. As a result, there is no way to state with confidence who the pharaoh is in the setting for the story of Abram’s trek to Egypt. But the most likely culprit would be a king of the 11th or 12th Dynasty of Egypt’s Middle Kingdom, or a king from the Second Intermediate Period.

The relief shown above dates from the Middle Kingdom period. The male figure on the left is wearing the red crown of Lower Egypt, the region where a traveler from Canaan would first enter Egypt. This relief can be viewed at the Brooklyn Museum. To protect the innocent, I will refrain from naming the Egyptian king in the photo above, so he will not be accused of improper behavior without a fair trial.