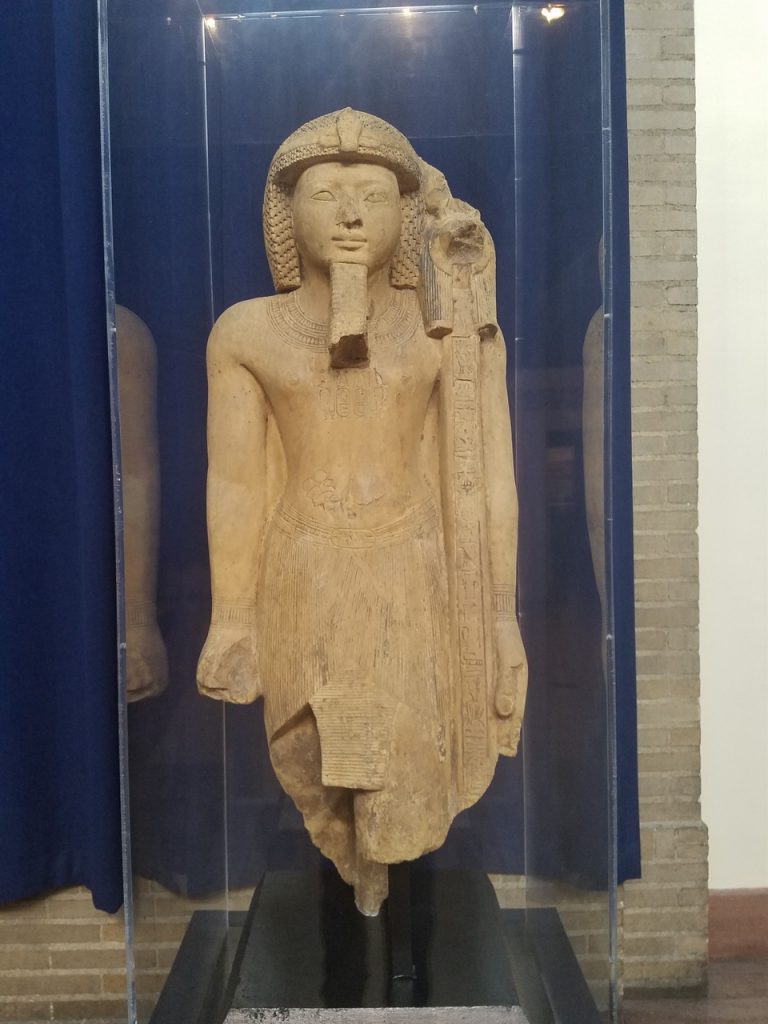 In Exodus 33, God tells Moses: “Leave this place, you and the people you brought up out of Egypt, and go up to the land I promised on oath to Abraham, Isaac and Jacob, saying, ‘I will give it to your descendants.’ I will send an angel before you and drive out the Canaanites, Amorites, Hittites, Perizzites, Hivites and Jebusites.” The Bible lists six nations that Israel will defeat in its conquest of Canaan.

In Deuteronomy 7, it reads “When the Lord your God brings you into the land you are entering to possess and drives out before you many nations – the Hittites, Girgashites, Amorites, Canaanites, Perizzites, Hivites and Jebusites, seven nations larger and stronger than you.” This list contains seven nations that Israel will defeat in its conquest of Canaan.

One nation that is missing from this list but which would become a rival of Israel is the Philistines.

The Merneptah Stele was written in the late 13th century BCE, in approximately 1209 BCE. It records the Egyptian king Merneptah’s victories over the Libyans. But near the end of the inscription, it mentions Merneptah suppressing a revolt in the area of Canaan. “The princes are prostrate saying Shalom!…Ashkelon is conquered, Gezer seized, Yanoam made nonexistent; Israel is laid waste, its seed is not.” This is the first mention of Israel outside of the Bible, and places nascent Israel within the southern Levant, likely in the central hill country of Canaan.

Ramesses III was the second Egyptian king of Egypt’s 20th Dynasty. His reign lasted from 1186-1155 BCE. In Ramesses III’s mortuary temple at Medinet Habu, it records his victories over invaders from the north, the “the Peleset, Theker, Shekelesh, Denyen, and Weshesh.”

Papyrus Harris I was found in a tomb near Ramesses III’s mortuary temple. It is the longest papyrus ever found in Egypt, and it provides a bit more color about these invaders. Ramesses III describes the battles. “I extended all the boundaries of Egypt; I overthrew those who invaded them from their lands. I slew the Denyen in their isles, the Thekel and the Peleset were made ashes. The Sherden and the Weshesh of the sea, they were made as those that exist not, taken captive at one time, brought as captives to Egypt, like the sand of the shore. I settled them in strongholds, bound in my name. Numerous were their classes like hundred-thousands. I taxed them all, in clothing and grain from the storehouses and granaries each year.”

This raises the possibility of Israel appearing in the land before the end of the 13th century BCE, only later followed by the Peleset, the likely forebears of the Philistines. If this is the case, it may not be an oversight that the Philistines are not included in the list of nations of Canaan before the Israelites arrived.

A statue of Ramesses III, on display at the Penn Museum, is shown in the image above.

Papyrus Harris I, also known as the Great Harris Papyrus, is housed at the British Museum. A fragment of it can be seen in the link below.