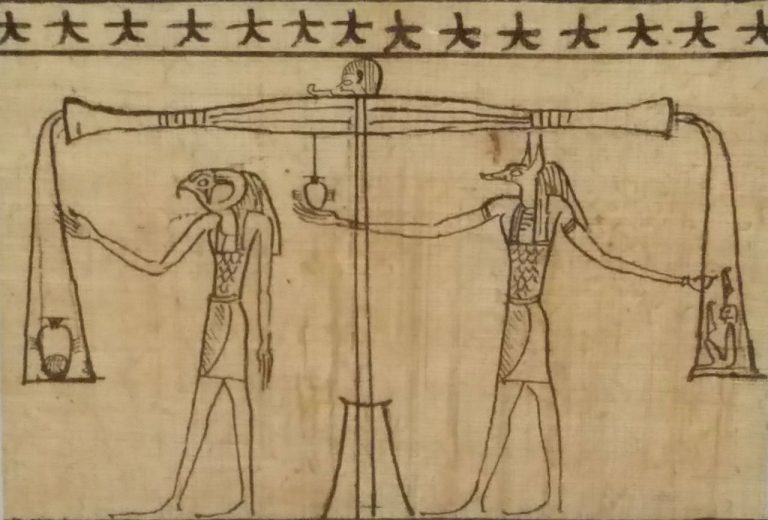 Towards the end of the book of Genesis, famine in the land of Canaan forced Jacob’s sons to go to Egypt find food. Jacob’s youngest son Benjamin stayed behind in Canaan with his father. Unbeknownst to the brothers, the viceroy of Egypt was none other than their brother Joseph. Joseph insisted that his brother Benjamin be brought down to Egypt if the brothers wanted food again.

Shortly after Benjamin arrived, Joseph had Benjamin arrested. Their brother Judah protested to Joseph that Jacob had said  “If harm comes to Benjamin, you will bring my gray head down to Sheol in misery.”

Sheol is sometimes translated as the grave, but in the Bible it more literally describes the realm of the dead. In 1 Samuel 28, Saul found a spiritual medium to summon the prophet Samuel, and the medium woke Samuel from his slumber in Sheol. In the Book of Job chapter 14, Job asks that God hide him in Sheol until God’s anger has passed.

The simple reading is that Sheol is the dark abode of the dead. The righteous Samuel resided there and Job asked to go to Sheol to avoid God’s wrath. It is later that Talmudic sages associated Sheol with a place of damnation. In the Babylonian Talmud Eruvin 19a, Rabbi Yehoshua ben Levi states that “Gehenna has seven names, and they are as follows: Sheol, Avadon, Be’er Shaḥat, Bor Shaon, Tit HaYaven, Tzalmavet, and Eretz HaTakhtit.” Sheol is associated with Gehenna, or hell, a place of damnation.

The Egyptians had a different concept of the afterlife. During the period of Egypt’s Old Kingdom, Pyramid Texts contained spells to help the dead transform into a spirit that could join the gods in the sky. These spells were only found in the tombs of the pharaohs, suggesting that the afterlife was available only to royalty.

Gradually, the afterlife became more democratized, available to the masses and not just to the pharaohs. In the early 2nd millennium Middle Kingdom period, Coffin Texts, spells written on coffins, came into use. These Coffin Texts present a picture of the Egyptian conception of what happens after death.

The Coffin Text spells were written to help the deceased navigate the underworld. The deceased would have to pass through a series of dangers, before appearing in front of the god Osiris for judgment. The deceased would affirm that he or she were righteous, and then the heart was weighed on a scale against a feather. If the heart was heavier than the feather, the soul would be destroyed. But if the heart balanced with the feather, the soul could enter into the afterlife, an eternal life that was a more pleasant version of life in ancient Egypt.

In the later New Kingdom, the Book of the Dead began to be placed in tombs to protect the dead. The Book of the Dead expanded on the spells in the Pyramid Texts and Coffin Texts as a way to further help people achieve eternal life.

The image above is of the Weighing of the Heart, a step on the way to the Egyptian afterlife, part of a larger Book of the Dead scroll on display at the Metropolitan Museum of Art in New York.