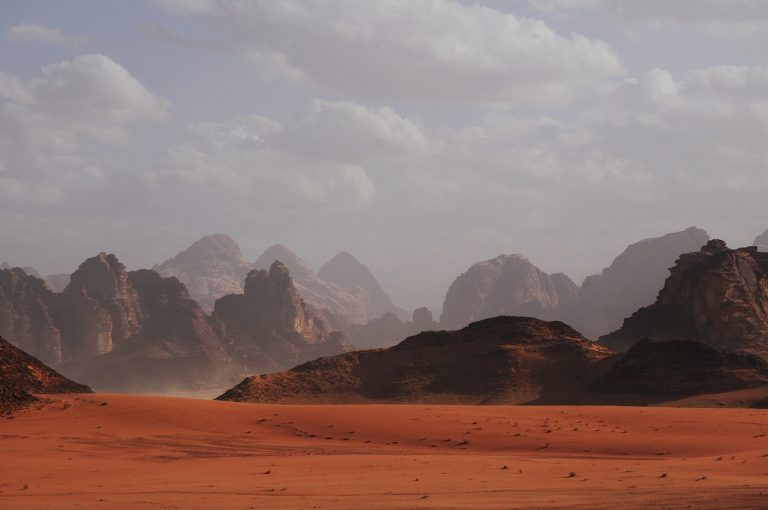 The actual route of the exodus in the Bible is unknown. The locations of the places named are not known. Nomadic wanderers are hard to find in archaeology. And the Sinai Desert has not been dug up to the degree that Israel has.

In Deuteronomy 1, Israel’s travelogue begins with the nation setting out from Horeb, where God made a covenant with his nation, and going to Kadesh Barnea. One possible suggestion for Kadesh Barnea is in the northeastern Sinai Desert, in the vicinity of ‘Ain Qudeirat and ‘Ain Qadis. Names tend to be sticky and continue in use throughout history, and the name Qadis bears a similarity to Kadesh.

But complicating any attempt to retrace the biblical route is that the account in Deuteronomy reads very differently than the account of Israel’s travels listed in Numbers 33.

Whereas Deuteronomy’s path begins at Horeb, Numbers 33 begins with Israel exiting Egypt. Israel set out from Ramesses and traveled to Sukkoth, then Etham at the edge of the desert. From there they went to Pi Hahiroth, Marah, Elim and into the Desert of Sin. Then it was on to Dophkah, Alush, Rephidim and into the Desert of Sinai. From there it was off to Kibroth Hattaavah, Hazeroth, Rithmah, Rimmon Perez, Libnah, Rissah, Kehelathah, Mount Shepher, Haradah, Makheloth, Tahath, Terah, Mithkah, Hashmonah, Moseroth, Bene Jaakan, Hor Haggidgad, Jotbathah, Abronah, Ezion Geber, then Kadesh in the Desert of Zin.

The listing in Numbers notes that at Elim there were twelve springs and seventy palm trees, and at Rephidim there was no water for the people to drink, but surprisingly, Numbers neglects to mention anything about Israel receiving the Ten Commandments or entering into the covenant with God during this part of the journey.

In Numbers 33, from Kadesh the nation went to Mount Hor, bordering Edom, where Aaron ascended the mountain and died, in the 40th year after Israel exited Egypt. However, in Deuteronomy 10, Aaron died at Moserah, which in the Numbers list is seven stops before Mount Hor. Further, in Numbers, Israel traveled from Moserah to Bene Jaakan. In Deuteronomy, Israel traveled from Bene Jaakan to Moserah and then on to Gudgodah before Jotbathah.

In Numbers 33 the nation departed from Mount Hor to Zalmonah, then Punon, Oboth and Iye Abarim on the Moab border. In Deuteronomy, from Kadesh Barnea, they went back toward the wilderness, around the hill country of Seir, then along the desert road of Moab, and crossed the Zered Valley, which is just south and east of the Dead Sea.

In Numbers 33, from the Moab border they traveled to Dibon Gad, Almon Diblathaim, and into the mountains of Abarim, near Nebo, then camped on the plains of Moab, from Beth Jeshimoth to Abel Shittim. In Deuteronomy, Israel passed by the region of Moab at Ar.

The photo above is of Wadi Rum, in southern Jordan desert, heading into Edomite territory. For the rest of Israel’s travels, it is still a question that could be taken from this Ozzy Osbourne song: Where did I wander?