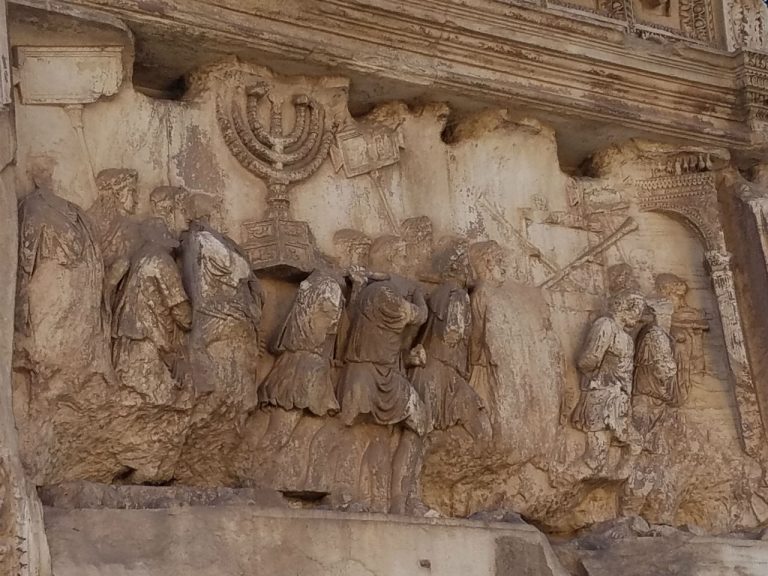 This week’s parshah discusses the tabernacle and the objects that would fill it. One such object is the seven branched menorah. Exodus 25 declares: “Make a lampstand of pure gold. Hammer out its base and shaft, and make its flowerlike cups, buds and blossoms of one piece with them. Six branches are to extend from the sides of the lampstand—three on one side and three on the other…then make its seven lamps and set them up on it so that they light the space in front of it.”

Perhaps the most famous depiction of a menorah is the one on the Arch of Titus in Rome, which shows Roman soldiers carrying the menorah. The scene itself was recorded in Josephus’ writings: “Spoil in abundance was carried past. None of it compared with that taken from the Temple in Jerusalem, a golden table many stones in weight and a golden lamp stand, similarly made, which was quite unlike any object in daily use. A center shaft rose from a base, and from the shaft thin branches or arms extended, in a pattern very like that of tridents, each wrought at its end into a lamp. There were seven of these lamps, thus emphasizing the honor paid by the Jews to the number seven.”

The Arch of Titus was a unique structure for its time, and became the template for later arches. That this structure memorializing the menorah’s capture was built in the first place reflects the politics of the time.

The First Jewish Revolt against Roman rule erupted in the year 66 CE. There were long simmering tensions between the Roman rulers and Jewish population that exploded and burned out of control. The Roman emperor Nero sent his armies to suppress the revolt, led by the general Titus Flavius Vespasianus, better known as Vespasian.

Nero himself was not particularly stable. He had his mother murdered, burned Christians alive and according to legend, played the fiddle during a great fire in Rome. A revolt erupted within the Roman Empire and Nero committed suicide. This set off a scramble for leadership and the year 69 become known as the Year of the Four Emperors.

According the Babylonian Talmud, Gittin 56, When [Rabban Johanan b. Zakkai] reached the Romans [and General Vespasian] he said, Peace to you, O king, peace to you, O king. [Vespasian] said: Your life is forfeit on two counts, one because I am not a king and you call me king, and again, if I am a king, why did you not come to me before now?…At this point a messenger came to him from Rome saying, Up, for the Emperor is dead, and the notables of Rome have decided to make you head [of the State].

In his book The Jewish War, the Jewish historian Josephus offers up his own version of the story. Josephus tells Vespasian “although you suppose you have taken captive a forsaken Josephus, I have come as a messenger of great tidings…You are to be Caesar, O Vespasian, and Emperor, you, and this your son.”…”When he had said this, Vespasian at that time did not believe him, supposing that Josephus came up with this as a cunning trick to save himself. But after a little while he came to have faith in this.”

Vespasian did return to Rome to become emperor, and his son Titus took command of the armies suppressing the Jewish revolt. Titus captured Jerusalem and destroyed the temple, leading to the confiscation of the menorah to Rome.

Ordinarily the defeat of a localized rebellion would not have justified a massive building campaign in Rome. But the new Flavian Dynasty, led by Vespasian, may have sought to establish their credentials and authority as a new family at the throne.

Following the fire that consumed Rome during the emperor Nero’s reign, Nero took a large area in the center of Rome for himself, added an artificial lake and a colossal statue of himself. The newly victorious emperor Vespasian returned this land to the people by building the Flavian Amphitheatre, known today as the Colosseum. The Colosseum was an amphitheater that could seat as many as 80,000 people, and was host to public spectacles such as gladiatorial games, animal contests and public executions.

An inscription at the Colosseum was deciphered to read “Imp. T. Caes. Vespasianus Aug. Amphitheatrum Novum Ex Manubis Fieri Iussit,” meaning “The Emperor Caesar Vespasian Augustus had this new amphitheatre erected with the spoils of war.” The only known war this could refer to was the Jewish Revolt. And the spoils of war included slave labor from Jewish captives and the seven branched menorah.

When Vespasian’s son Titus died, or was murdered by his brother Domitian, Domitian continued the building spree. Domitian built the Arch of Titus, commemorating the suppression of the Jewish Revolt. Building an arch for his brother may have had the dual purpose of establishing the family’s legitimacy by connecting it to a military victory and providing Domitian cover for the murder of his brother.

The Arch of Titus is located at the Roman Forum. On one side of the arch, Titus triumphantly enters Rome. On the other, the menorah is carried aloft. This structure became the template for later arches, including the Arc de Triomphe in Paris, the arch at Grand Army Plaza in Brooklyn and the Washington Square Arch in Greenwich Village, NYC. The photo above is of the image on the Arch of Titus at the Roman Forum, in Rome. Professor Steven Fine of Yeshiva University “colorized” the Arch of Titus in Rome, based on paint residues. The re-creation can be seen in this video link: