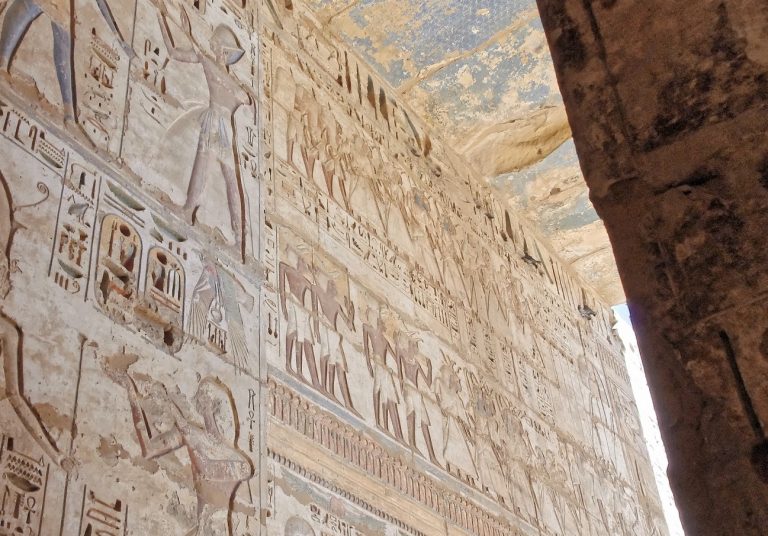 Exodus 23 lists a series of ethical rules. One of these addresses the treatment of non-locals. “Do not oppress a foreigner; you yourselves know how it feels to be foreigners, because you were foreigners in Egypt.”

The Torah warns Israel not to oppress a foreigner, for the people of Israel were foreigners in Egypt and should understand that experience. In the Bible, the Egyptians mistreated the Israelites. In Egyptian art from Ramesses III’s mortuary temple at Medinet Habu, Egypt was unkind to another foreign group.

In Year 8 of his reign, Ramesses III faced a threat from the north, of invaders who approached from the sea.

These invaders were said to have wreaked havoc elsewhere. “No land could stand before their arms, from Hatti, Kode, Carchemish, Yereth, and Yeres.” They set up camp in Amor, which would correlate to the land of the biblical Amorites, in the Levant.  The invaders were a confederation of groups, “the Peleset, Theker, Shekelesh, Denye(n), and Weshesh, lands united.”

But when they reached Egypt, Ramesses III defeated and captured them. “Now the northern countries, which were in their isles, were quivering in their bodies. They penetrated the channels of the Nile mouths. Their nostrils have ceased, their desire is breathe the breath. His majesty is gone forth like a whirlwind against them, fighting on the battlefield like a runner. The dread of him and the terror of him have entered into their bodies; capsized and overwhelmed in their places. Their hearts are taken away; their soul is flown away. Their weapons are scattered in the sea. His arrow pierces him whom he has wished among them, while the fugitive is become one fallen into the water. His majesty is like an enraged lion, attacking his assailant with his paws; plundering on his right hand and powerful on his left hand.”

Ramesses III captured the invaders and resettled them. Notably, one of the groups that Ramesses III captured is the Peleset. Peleset has a linguistic similarity to the Pelishtim of the Bible. Pelishtim is translated as Philistines, the Philistines who would settle in the southwestern corner of the southern Levant and in the Bible would become a rival of early Israel.

The right hand side of the image above shows the unique headdresses of some of these invaders from the north. The invasion by these groups is depicted at Medinet Habu, and can be seen in the link below, from the University of Chicago collection. Ramesses III fires an arrow at the invading ships as his own ships confront the enemy. To date, it is the world’s oldest known depiction of a naval battle.