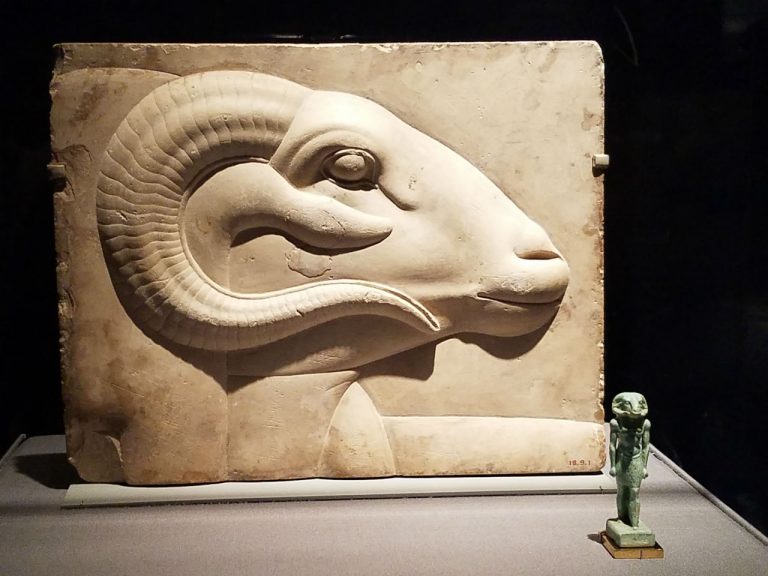 In Exodus chapters 7-12, God punishes the Egyptians with plague after plague. The Nile River’s waters turned into blood. Frogs spread across the land, followed by a lice infestation. The 4th plague of “arov” is translated literally as “mixing.” Traditionally this plague is interpreted as wild beasts in Jewish sources, but others argue that it means insects or flies. Next the animals suffered from disease, people developed boils, violent thunderstorms struck and locusts swarmed the land. Darkness descended upon Egypt and finally the Egyptians’ first-born children died.

The penultimate plague, darkness, appears to be a challenge to the god Ra.

Egyptian gods could rise or fall in importance across Egyptian history. Once elevated in status, Ra remained one of the most important gods in all of Egypt. With the ascension of Egypt’s New Kingdom, Ra was blended with the god Amun from the southern capital of Thebes, to become Amun-Ra.

Ra was depicted in a variety of forms. A common depiction shows Ra with the head of a falcon and the sun disk over his head. An important Egyptian legend was that each day Ra traveled with the sun in a boat across the sky. At night Ra would cross the underworld with the sun and defeat a serpent on his way to bringing the sun back in time for the next day. The plague of darkness would then be an attack on Ra. In the Bible’s story, God would be demonstrating that Ra failed to bring the day’s sun.

Another common depiction of Ra was as a ram or a man with the head of a ram. In Exodus 12 Moses follows God’s command and instructed the Israelite leaders to “Go at once and select the animals for your families and slaughter the Passover lamb.” In the sheep family, male sheep are called rams, the females are called ewes, and immature animals lambs. The ceremonial offering is to be an animal that is representative of Ra, Egypt’s premier god.

In the exodus narrative, given that God repeatedly hardened pharaoh’s heart to convince him not to free the Israelites, the plagues upon Egypt may have been as much as about challenging the Egyptian gods as they would be about freeing the Israelites.

For the Egyptians and their slave holding ways, Willie Nelson sang it best: