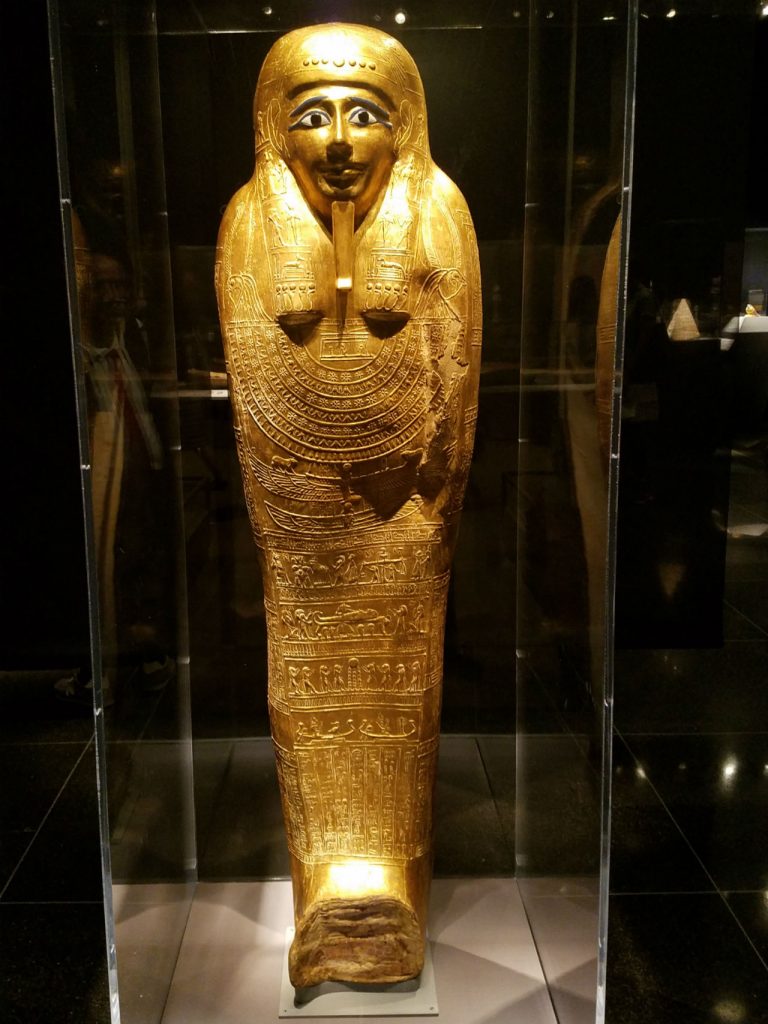 In Exodus 32, the natives became restless when Moses was delayed in returning from Mount Sinai. The people surrounded Moses’ brother Aaron and asked him to fashion a god to lead them. Aaron told them to “Take off the gold earrings that your wives, your sons and your daughters are wearing, and bring them to me.” When they did, Aaron shaped it into a golden calf, which the people then declared to be the god who took them out of Egypt.

In the biblical story, the source of the gold was the Egyptians themselves. In Exodus 12, “the Israelites did as Moses instructed and asked the Egyptians for articles of silver and gold and for clothing. God made the Egyptians favorably disposed toward the people, and they gave them what they asked for, so they plundered the Egyptians.”

Gold has been found in Egypt that dates to before the times Egypt was united in a kingdom. Egypt itself was the source for its own gold. Gold in Egypt could be found in alluvial deposits, in the soil that had been fed by the Nile. Gold was also found in the desert to the east of the Nile and to the south of Egypt in Nubia.

Recovering gold from underground soil or near water sources was relatively straightforward. Gold from the rivers and soil was sifted and washed. The lighter soil washed away and the heavier gold deposits were identified and removed.

The process for extracting gold from Egypt’s mines was more complex. The mines were located in remote areas and required that all supplies, including food and water, be brought to the site, a logistical nightmare. The work was manpower intensive, exacerbating the challenges. It was seasonal, due to extreme weather conditions in the desert. And the operation was susceptible to theft along the route.

On site, where there were veins of gold found embedded in rock, the stone was heated and then broken with hammers. The stone dust was washed and the heavier gold was removed for refining.

Diodorus was a 1st century BCE Greek historian who wrote Bibliotheca Historica, the ‘Historical Library.’ In Book III, chapters 12-14 he wrote about the grueling nature of mining work in Egypt’s deserts.

He described the mining process. “The gold-bearing earth which is hardest they first burn with a hot fire, and when they have crumbled it in this way they continue the working of it by hand; and the soft rock which can yield to moderate effort is crushed with a sledge by myriads of unfortunate wretches…Now these men, working in darkness as they do because of the bending and winding of the passages, carry lamps bound on their foreheads.”

The work is described as grueling. They “work at their task unceasingly both by day and throughout the entire night, enjoying no respite and being carefully cut off from any means of escape; since guards of foreign soldiers who speak a language different from theirs stand watch over them, so that not a man, either by conversation or by some contact of a friendly nature, is able to corrupt one of his keepers.. all without exception are compelled by blows to persevere in their labors, until through ill-treatment they die in the midst of their tortures. Consequently the poor unfortunates believe, because their punishment is so excessively severe, that the future will always be more terrible than the present and therefore look forward to death as more to be desired than life.”

Evidence for gold mining in Egypt can be seen in the world’s first known map of a mine, the Turin Papyrus Map. The Turin Papyrus Map dates to 12th century BCE. The map shows the area of Wadi Hammamat in the eastern desert of Egypt. It shows mountain ranges, valleys and a series of landmarks, including a stone quarry and a gold mine. The geographic features on the map are still accurate today. The ancient Egyptians knew that there was ‘gold in them thar hills.’

The Turin Papyrus Map is housed in Italy in Turin’s Museo Egizio. The photo above is of a gilded coffin for a mummy now housed at the Metropolitan Museum of Art in New York, evidence of the abundance of gold in Egypt.

To close, a song about “There’s gold in them thar hills.”