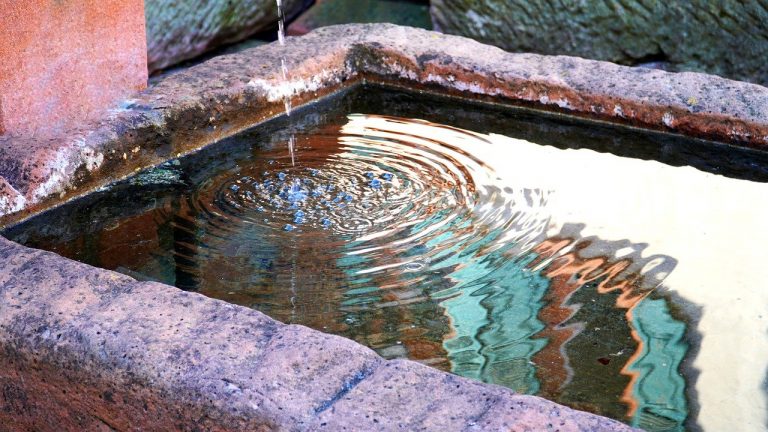 In Leviticus 16, the High Priest is restricted from entering the Holy of Holies in the Tabernacle all days save the Day of Atonement. In order to enter the Holy of Holies on the Day of Atonement, the High Priest had to perform a series of rituals and offerings before entering. This process began with the High Priest bathing in water. This process also ended with ritual purification. “Then Aaron is to go into the tent of meeting and take off the linen garments he put on before he entered the Most Holy Place, and he is to leave them there. He shall bathe himself with water in the sanctuary area and put on his regular garments.”

1 Kings 7 describes the elements of Solomon’s temple, which included installations for water, which would be used in purification rituals and in offerings. “He made the Sea of cast metal, circular in shape, measuring ten cubits from rim to rim and five cubits high. It took a line of thirty cubits to measure around it. Below the rim, gourds encircled it, ten to a cubit. The gourds were cast in two rows in one piece with the Sea. The Sea stood on twelve bulls, three facing north, three facing west, three facing south and three facing east. The Sea rested on top of them, and their hindquarters were toward the center. It was a handbreadth in thickness, and its rim was like the rim of a cup, like a lily blossom. It held two thousand baths.” Two thousands baths here translates to roughly 12,000 gallons.

Another source for water for ritual was a series of basins. “He then made ten bronze basins, each holding forty baths and measuring four cubits across, one basin to go on each of the ten stands.” Forty baths, each basin holding roughly 240 gallons of water.”

The Ain Dara Temple in northwestern Syria that was built in the Late Bronze Age, and expanded in the Iron Age II, contains many features similar to Solomon’s Temple as described in the Bible. Storage for water can likely be added to the list.

In Solomon’s temple, the large ‘Sea of cast metal’ is placed in the front courtyard close the altar used for sacrifices. In the Ain Dara temple, a large chalkstone basic was placed in the paved courtyard. The logical explanation is that this basin held water used in temple rituals.