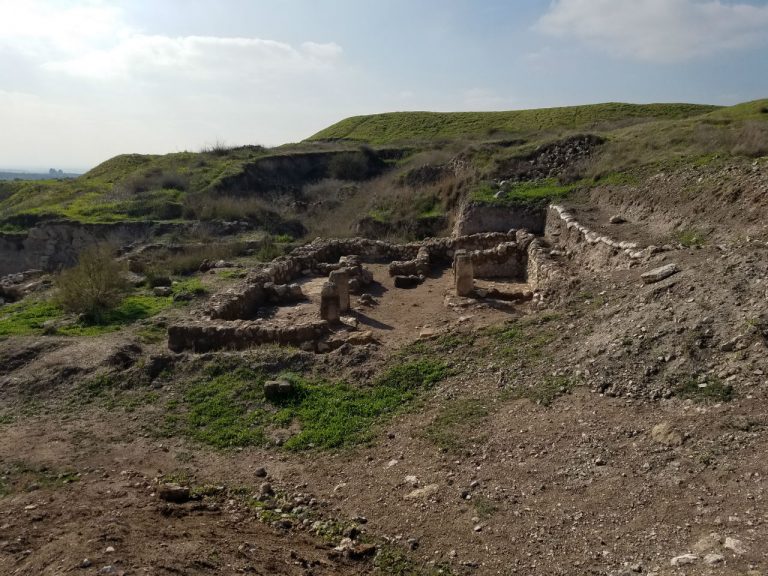 Along with rules for sacrificial offerings, Leviticus addresses laws of ritual purity. Leviticus 5 requires an offering from someone who was unwittingly ritually impure. Leviticus 6 contains instructions for the treatment of ritually impure pots. Leviticus 7 warns that anyone ritually unclean must not eat from a ritual offering.

At the end of the Late Bronze Age, the central highlands of Canaan experienced a significant rise in population. In Iron Age I, 1200-1000 BCE, hundreds of new villages appeared at previously unoccupied sites. One of the unique aspects of these villages is the appearance of the ‘Four-Room House.’

The ‘Four-Room House’ was a type of dwelling that became the predominant style of home in these new central hill country villages. The main feature of the four-room house is a broad rectangular room in the back and three narrow rectangular rooms running the length of the broad room. The entrance was to the central narrow room, which often had no roof and was exposed to the elements. The rooms were separated by a wall or by pillars. The presence of these pillars could be what Proverbs 9:1 is referring to when it says “Wisdom has built her house, she has set up its seven pillars.”

The houses could also have a second floor above the broad rectangular room. The first floor would be used for storage and housing, and the second floor designated for the family to eat and sleep. The courtyard often included a cistern for storing water, silos for storing food and an oven.

The ‘Four-Room House,’ did not necessarily have four rooms. The space could contain three rooms or the rooms could be subdivided to create five or more rooms. But the general layout remained the same.

The Four-Room House became the dominant home style in Israelite villages for the span of the Iron Age in Canaan, from 1200 BCE until the Babylonian conquest of the kingdom of Judah and the destruction of the temple in Jerusalem.

The origin of this home style is debated. There are differing opinions but no clearly accepted antecedent. This adds to the mystery of the origins of the settlers in the central hill country of Canaan who fueled the population increase and dwelled in the four-room house.

The uniformity and location of the homes have led some archaeologists to point to the Israelites and to consider these homes a unique Israelite cultural marker. Various suggestions have been offered as to why the ubiquity and uniformity of these structures. One thought is that the homes reflected an egalitarian ethic. Unlike some homes built with a linear layout, where more important rooms would be positioned in the back of the home, in the four-room house every room was accessible from the courtyard area.

Another claim is that the uniformity of the layout across these villages was to be in accordance with ritual purity laws. In the four-room house, a ritually impure person, such as a menstruating woman, could enter the courtyard and then enter any room in the home without exposing the other rooms to ritual impurity.

Ritual impurity laws such as those in Leviticus could have contributed to the widespread use of an architectural style in Canaan’s central highlands and early Israel’s settlement.

The photo above is of the archaeological remains of a ‘Four-Room House,’ taken at Gezer in Israel. Note the remains of the standing pillars that separate the different rooms.