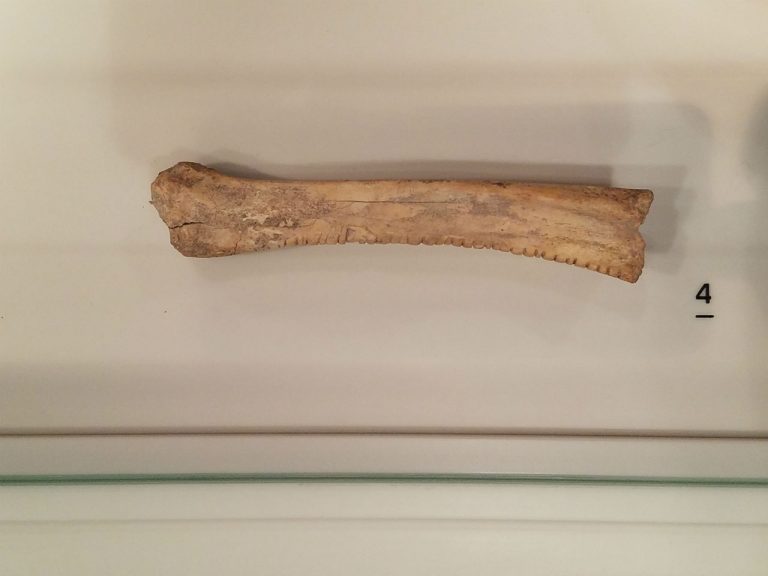 In Leviticus 11, the Bible lists the animal species that one is permitted to eat and those that one is prohibited from eating. For animals, the Bible instructs, “You may eat any animal that has a divided hoof and that chews the cud.“ The pig is specified with an additional prohibition: “And the pig, though it has a divided hoof, does not chew the cud; it is unclean for you. You must not eat their meat or touch their carcasses; they are unclean for you.” Deuteronomy 14 later repeats the restriction: “The pig is also unclean; although it has a divided hoof, it does not chew the cud. You are not to eat their meat or touch their carcasses.”

With the end of the Late Bronze Age and the beginning of the Iron Age in the 12th century BCE, the central hill country of Canaan saw a sharp rise in population and the creation of hundreds of new villages. The inhabitants of these new villages lived in unique “Four-Room Houses,” and the consensus is that these new settlers were the early Israelites.

While the Israelites inhabited the hill country, the groups that comprised the ancient Canaanites inhabited the coastal region to the west and north, extending into the area of Lebanon. In the 12th century, a group of people referred to as Sea Peoples invaded from the sea and established footholds in the southwestern corner of the southern Levant. One of the groups of Sea Peoples was called the Peleset, the group that later came to be known as the Philistines. These Sea Peoples established themselves in five major cities near the southern coast of Canaan: Gaza, Gath, Ekron, Ashdod and Ashkelon.

Archaeologist study human history by looking at material remains. There is a tendency to think of great monuments, but monuments and inscriptions can often be subject to bias. One artifact that does not lie is garbage. Archaeologists study ancient garbage dumps to determine what foods were part of the local diet.

Prior to the Iron Age, pig was a component of the diet across the landmass of Canaan. With the invasion of the Sea Peoples, the Philistines brought pigs along with them and pig was a major part of the Philistine diet. At the same time, pig disappears from diets in the central hill country inhabited by the early Israelites and in certain Canaanite areas in the lowlands of Canaan.

The question is, what is the reason for the avoidance of the pig in the diet in the Iron I villages of the central hill country? The potential exists for pig avoidance to have been an Israelite cultural marker, perhaps the result of a religious belief.

The image above is of an incised pig bone discovered at a Philistine site. It is on display at the Corinne Mamane Museum of Philistine Culture in Ashdod, the one time city of the ancient Philistines.

The border lines, the divide between the Israelites and the Philistines, can be roughly drawn where the pig bones are found. With pigs on one side and no pigs on the other, the Philistines might have enjoyed this cheer: