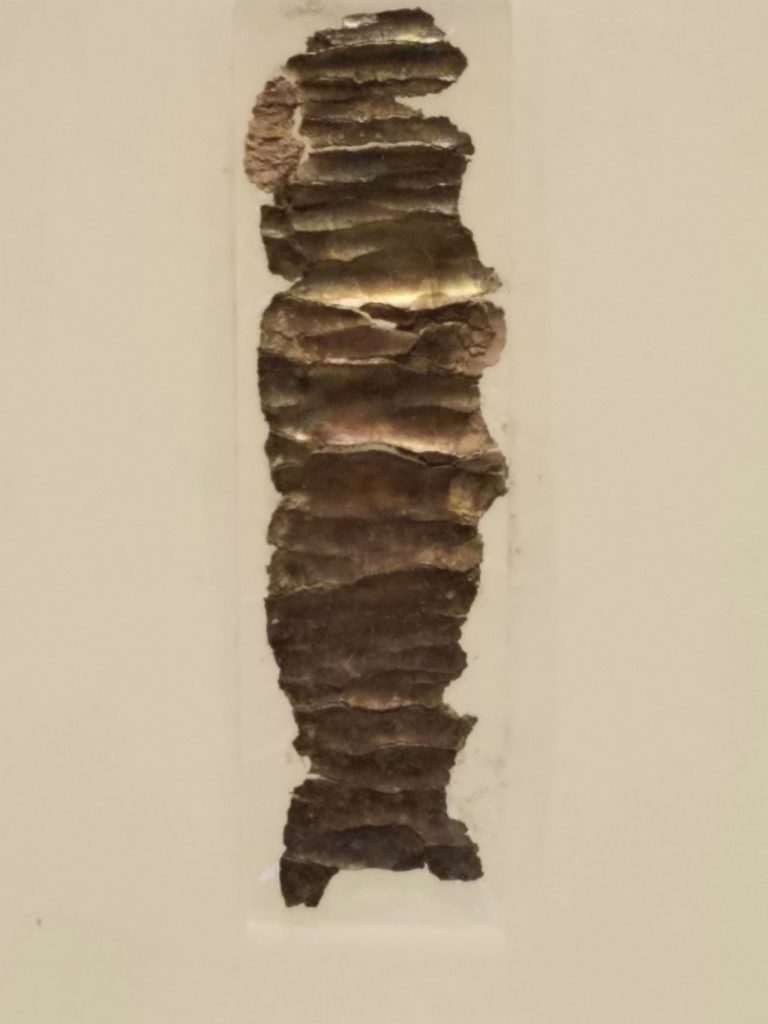 In parshat Naso, Moses is instructed to tell his brother Aaron the text for the priestly blessing:

The Lord bless you and keep you.

The Lord make his face shine on you and be gracious to you.

The Lord turn his face toward you and give you peace.

These words today remain part of the daily prayer service and are part of one of the most important archaeological discoveries for the Bible.

In 1979, Gabi Barkai undertook excavations at Ketef Hinnom in Jerusalem. The site is above the western side of the Valley of Hinnom, opposite of the City of David on the other side of the valley. Specifically, the site is near the Begin Center and St. Andrew’s Scottish Church.

Gabi Barkai had a group of kid volunteers helping him. There was one kid who was especially annoying. Gabi sent this kid, Natan, to go clean an empty tomb, mainly to keep the kid away from him. The kid returned shortly with a fully intact clay jar, an extremely rare find and a violation of archaeological method, because objects are supposed to be left in place for analysis. Natan had taken a hammer and was hitting the floor, but this floor turned out to be the ceiling of another room below it.

In the movie the Goonies, the klutzy, annoying kid Chunk saves the day so the kids can take the treasure. At Ketef Hinnom, the annoying kid Natan discovered a room that produced perhaps the most important archaeological artifact for the study of the Bible.

The room Natan revealed was full of artifacts, that were later dated to the latter half of the 7th century to the early 6th century BCE. Included among the items were two small tarnished amulets in the shape of rolled up silver scrolls. They were brittle and it took three years before they were successfully unwound. The scrolls were written in an archaic Hebrew script and read:

The Lord bless you and keep you.

The Lord make his face shine on you and be gracious to you.

The Lord turn his face toward you and give you peace.

Written letters have a tendency to change over time. For example, in the original 18th century United States Bill of Rights, the word Congress is spelled with one ‘long s’, a letter that no longer appears in today’s English. A study of the archaic Hebrew letters on the Ketef Hinnom scrolls demonstrated that the scrolls were from the late 7th or early 6th century BCE.

This would make the scrolls the oldest existing words from the Bible, 400 years older than the Dead Sea Scrolls and before the destruction of the First Temple in Jerusalem. Typically, writing on an amulet would be taken from a pre-existing known source. This has important implications for the study of the Bible, as it demonstrates that the words of the Bible were already written before the exile to Babylon.

Thanks to an annoying kid with a hammer, we today know that the Lord kept the amulet intact, and that the daily priestly blessing are words that were known in the First Temple period.

The Ketef Hinnom Scrolls, one of which is shown above, are on display at the Israel Museum in Jerusalem.