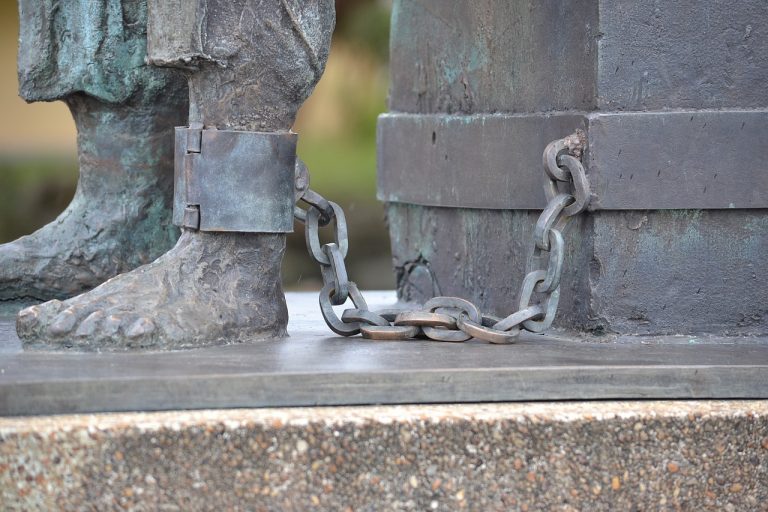 Leviticus 25 discusses rules for owning slaves. “If any of your fellow Israelites become poor and sell themselves to you, do not make them work as slaves. They are to be treated as hired workers or temporary residents among you; they are to work for you until the Year of Jubilee. Then they and their children are to be released, and they will go back to their own clans and to the property of their ancestors. Because the Israelites are my servants, whom I brought out of Egypt, they must not be sold as slaves. Do not rule over them ruthlessly, but fear your God.”

How Israelites are to treat their own lies in contrast to how Israelites were treated by the Egyptians. In Exodus 5 Moses asked the pharaoh to allow the Israelites to take three days to sacrifice to their God. The pharaoh responded by increasing the difficulty of their workload. “You are no longer to supply the people with straw for making bricks; let them go and gather their own straw. But require them to make the same number of bricks as before; don’t reduce the quota. They are lazy; that is why they are crying out, ‘Let us go and sacrifice to our God.’ Make the work harder for the people so that they keep working and pay no attention to lies.”

In the Bible, after the Israelites fled, the pharaoh decided he preferred having the cheap labor. “What have we done? We have let the Israelites go and have lost their services!”

The matter of escapees was not taken lightly in Egypt. In the peace treaty between Hittites and Egypt after the Battle at Kadesh in the 13th century BCE, the two sides agreed that people who flee one state for the other should not be harmed, but returned. If the terms are violated, the gods and goddesses of the country shall exterminate the king’s descendants.

Papyrus Anastasi V is held in storage at the British Museum. It can be seen via this link:

To imagine the slaves’ plight, you can think of it with this soundtrack: