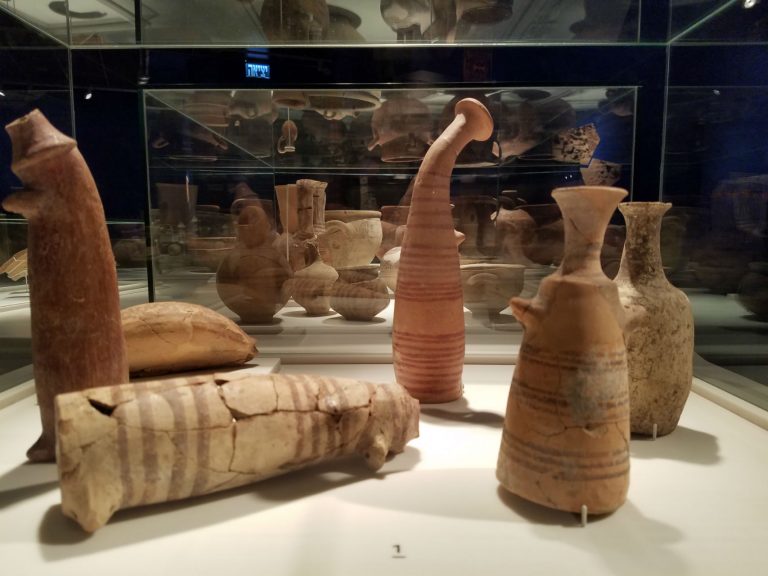 In Leviticus 26, the nation of Israel is told that if they follow God’s laws they will be rewarded, but if they don’t they will be punished. “But if you will not listen to me and carry out all these commands, and if you reject my decrees and abhor my laws and fail to carry out all my commands and so violate my covenant, then I will do this to you: I will bring on you sudden terror, wasting diseases and fever that will destroy your sight and sap your strength. You will plant seed in vain, because your enemies will eat it. I will set my face against you so that you will be defeated by your enemies; those who hate you will rule over you, and you will flee even when no one is pursuing you.”

In early Iron Age Canaan, for the Israelites, that enemy was the Philistines.

In the early Iron Age, groups known collectively as the Sea Peoples invaded parts of the eastern Mediterranean coast. They appear to have come from the Aegean Sea, around Greece, Crete or the Anatolian coastline. The Egyptian pharaoh Ramesses III repelled these invaders in a sea battle off the northern coast of Egypt, but some groups successfully came ashore in southwestern coastal Canaan. They came to dominate this region and establish the Philistine pentapolis of five major cities: Gaza, Ashkelon, Ashdod, Ekron and Gath.

One cultural marker found in the archaeological record which distinguishes the Philistines from the Israelites in the hill country is their pottery. Pottery is not always a great cultural identifier, because it can be traded between groups, but between the early Philistines and their rivals the differences are significant.

The Philistine pottery was decorated with geometric shapes and motifs such as fish, birds, boats, and other scenes. The decorations are reminiscent of the styles in the Aegean, an indicator of the Sea People’s origins.

The Philistine pottery also features a wide array of types and shapes, entirely different than Canaanite and Israelite vessels. This include bell-shaped bowls, large bowls that are called kraters, cooking jugs, stirrup jars, feeding bottles, and strainer jugs. Some of the unique shapes can be seen in the image above, taken at The Corinne Mamane Museum of Philistine Culture in Ashdod.

Essentially the Philistine pottery was of higher quality than the pottery of its neighbors. It was better made, more ornate and had more unique craftsmanship. These were the fancy new neighbors of Israel. For an interesting look at ancient Greek pottery making, enjoy the following brief video: