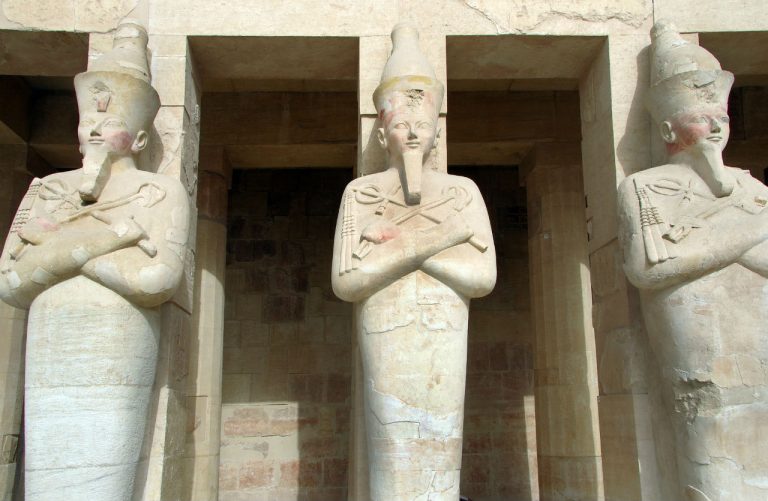 Deuteronomy 22 warns that “a woman must not wear men’s clothing, nor a man wear women’s clothing, for the Lord your God detests anyone who does this.”

In ancient Egypt, the pharaohs were generally depicted wearing a fixed range of clothing. On his head, the pharaoh might wear the tall white crown of Upper Egypt, the stouter red crown of Lower Egypt or a combination of the two. Another option was the nemes, a striped cloth worn on the head that draped over the shoulders. On the headgear, resting in the area of the forehead, there might be the upright head of a cobra, to symbolize the pharaoh’s royalty and divinity.

Lice was a problem in ancient Egypt, so the Egyptians would shave the hair on their heads and bodies to reduce the available real estate available for these bugs. In its place, people might have wigs, and for the pharaohs, false beards that were worn with the traditional attire.

The pharaohs were shown to be broad shouldered and resolute, to symbolize their power and stability. It was the pharaoh who represented order against the forces of chaos, and they were represented as being capable of that role.

After Thutmose III became the sole ruler of Egypt, he began to destroy and remove all mentions of Hatshepsut. This may have been done to remove any doubt about the royal succession from Thutmose I to Thutmose II to Thutmose III. But it complicated the job for archaeologists later.

One of Hatshepsut’s key achievements was the construction of a funerary temple in western Thebes, opposite today’s Luxor. Early on in Hatshepsut’s rule, she was depicted as a female in Egyptian art. But as she solidified her rule, she increasingly came to be depicted as male. She was shown wearing the typical headdress of a pharaoh, then with the false beard, and then entirely with a male body. It was only through inscriptions that that archaeologists were able to determine that Egypt indeed had a female ruler during the 18th Dynasty of the New Kingdom.

The image above is from Hatshepsut’s funerary temple in Thebes, where Hatshepsut is shown wearing the false beard that is typically worn by the male pharaoh. Deuteronomy 22 would not approve.