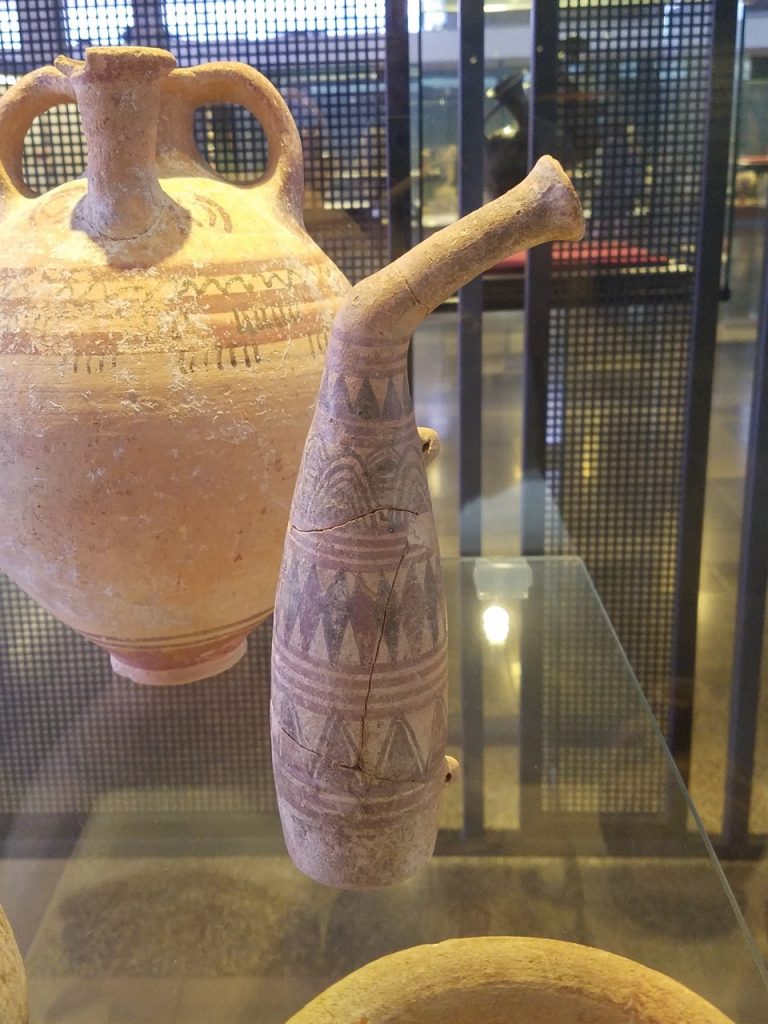 In Numbers 19, God gives the Moses and Aaron instructions for how to purify someone who has come in contact with a dead body.

“The Lord said to Moses and Aaron: This is a requirement of the law that the Lord has commanded: Tell the Israelites to bring you a red heifer without defect or blemish and that has never been under a yoke… the heifer is to be burned: its hide, flesh, blood and intestines. The priest is to take some cedar wood, hyssop and scarlet wool and throw them onto the burning heifer…A man who is clean shall gather up the ashes of the heifer and put them in a ceremonially clean place outside the camp…For the unclean person, put some ashes from the burned purification offering into a jar and pour fresh water over them.” The water containing the ashes would then be sprinkled on the ritually impure individual.

Archaeology bears out the Philistines’ technical superiority. Pottery is an important artifact in archaeology. It can be used for relative dating across different locations. It can point to origins of a group of settlers. And it can be used to indicate how technically advanced a society was.

The Israelites who inhabited the central hill country of Canaan in Iron Age I, between roughly 1200 BCE and 1000 BCE, were poorer than the Philistines who lived in the southern coastal plain of Canaan. Israelite jars, such as the one referenced in the purification ceremony  of the ashes of the red heifer, were typically Canaanite in form, but of lower quality.

Philistine jars by contrast were more ornate and came in a wider variety of shapes and forms. It points to their being richer and more technically advanced than the early Israelites. The Philistine pottery in Iron Age I marked a peak in Philistine artistic and technical ability in pottery design.

The Philistines appear to have arrived in the coastal plain in the first half of the 12thcentury BCE. Their early sites are in part identifiable by their use of Philistine 1 pottery, also known as Philistine Monochrome.

By roughly 1150 BCE, the Philistines began to use even more ornate pottery, known as Philistine 2 or Philistine Bichrome. This pottery predominated in Philistine cities until roughly 1000 BCE.

A common Aegean theme that appeared on the pottery was birds. These bird figures also appeared at Ramesses III’s mortuary temple at Medinet Habu in Thebes. In the scene of the battle between Ramesses III and the invading people of the sea in 1175 BCE, the invaders’ ships feature figures of birds.

Philistine Bichrome was used in a variety of forms that resembled those of Philistine Monochrome, including in bowls, jars and jugs, but it also appears in newer forms of jars and bottles.

The technical skill is on display in the jar shown in the image above. It features a mix of colors, is narrow, with a tilted spout, all of which would require greater technical skill to produced than a simple cooking pot. The photo was taken at the Corinne Mamane Museum of Philistine Culture in Ashdod.