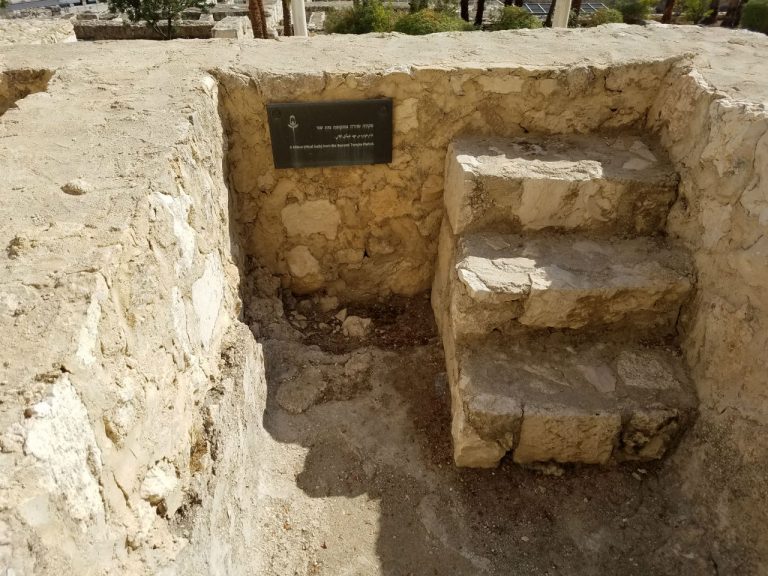 Parshat Achrei Mot stresses the importance of becoming ritually pure through water. Leviticus 16 describes the ritual process. “Then Aaron is to go into the tent of meeting and take off the linen garments he put on before he entered the Most Holy Place, and he is to leave them there. He shall bathe himself with water in the sanctuary area and put on his regular garments. Then he shall come out and sacrifice the burnt offering for himself and the burnt offering for the people, to make atonement for himself and for the people.”

Achieving purity through water was an important part of the ritual service.

The ancient city of Jerusalem was built at the location that is today known as the City of David, and then rose in elevation to the Temple Mount. The Temple Mount sits between the Kidron Valley to the east and the Valley of Hinnom to its west. Pilgrims arriving from the south would ascend the hill towards the temple, to enter the temple through the Hulda Gates at the southern wall of the temple.

Between the lower lying City of David and the Temple Mount, just south of the southern temple wall, is an area known as the Ophel. It is a term that appears a number of times in the Bible, and apparently was in frequent need of repair. In 2 Chronicles Chapter 27, Jotham King of Judah rebuilt the Upper Gate of the temple of the Lord and did extensive work on the wall at the hill of the Ophel. In Nehemiah Chapter 3, “the temple servants living on the hill of Ophel made repairs up to a point opposite the Water Gate toward the east and the projecting tower. Next to them, the men of Tekoa repaired another section, from the great projecting tower to the wall of Ophel.”

During the Roman era of the 2nd temple period, at the Ophel, there were many mikvas, or ritual baths, and cisterns that fed the mikvas. Just before entering the Hulda Gates that lead to the temple, people arriving on their pilgrimage from the south could bathe, so that they would be cleansed from their long travels beyond the city. In Bobby Darin’s words, they could be “a-splishin’ and a-splashin… Long about a Saturday night” in order to enter the temple in a state of ritual purity.

These now dry mikvas, the stairs leading past them and the closed up Hulda Gates can be seen today in the Davidson Center, the archaeological park on the southern side of Jerusalem’s ancient temple walls.