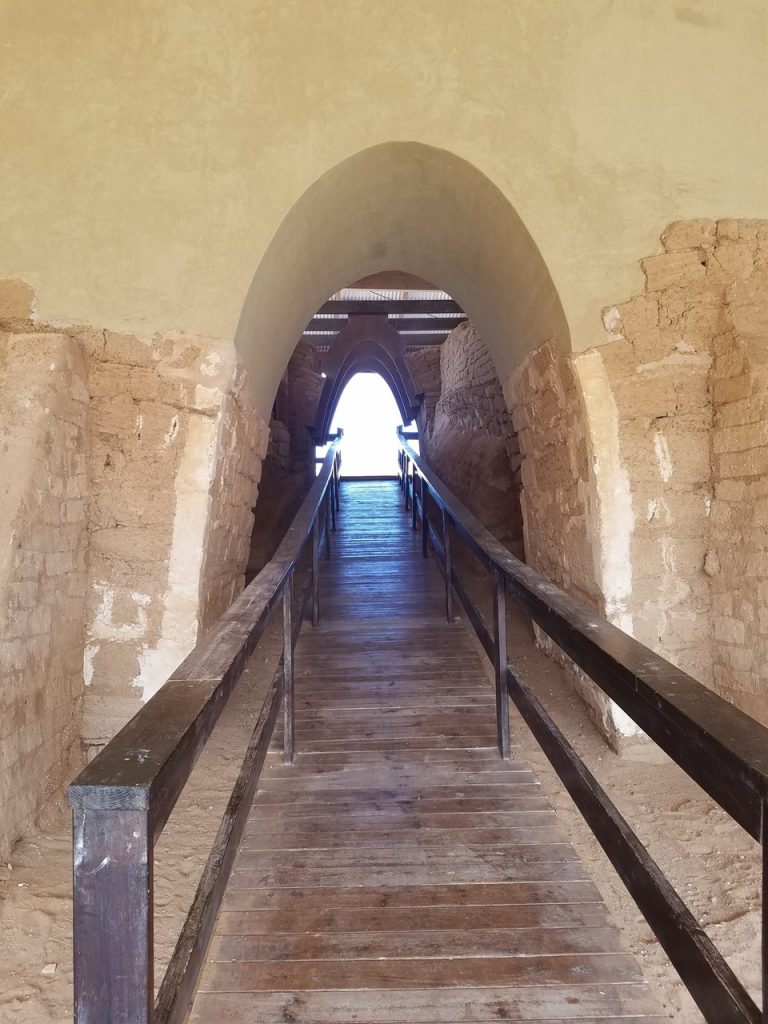 In Exodus 37, the centerpiece of the tabernacle, the ark of the covenant, was built.  “Bezalel made the ark of acacia wood—two and a half cubits long, a cubit and a half wide, and a cubit and a half high. He overlaid it with pure gold, both inside and out, and made a gold molding around it. He cast four gold rings for it and fastened them to its four feet, with two rings on one side and two rings on the other. Then he made poles of acacia wood and overlaid them with gold. And he inserted the poles into the rings on the sides of the ark to carry it. He made the atonement cover of pure gold—two and a half cubits long and a cubit and a half wide. Then he made two cherubim out of hammered gold at the ends of the cover. He made one cherub on one end and the second cherub on the other; at the two ends he made them of one piece with the cover. The cherubim had their wings spread upward, overshadowing the cover with them. The cherubim faced each other, looking toward the cover.”

In Joshua 18, Joshua set up the tabernacle in Shiloh. “The whole assembly of the Israelites gathered at Shiloh and set up the tent of meeting there. The country was brought under their control.”

To alleviate the problem and atone for taking the ark, the Philistines put the ark on a cart, with five golden hemorrhoids and five golden mice, each one representing the five great Philistine cities: “for Ashdod one, for Gaza one, for Ashkelon one, for Gath one, for Ekron one.” The ark was then sent to Beit Shemesh, and the plague ended.

The five major Philistine cities listed in the Bible are often referred to as the Philistine Pentapolis.

There are a number of ways archaeologists can determine where an ancient city was. One way of doing so is by its name, and Ashdod, Ashkelon and Gaza all carry their ancient names. There has not been extensive digging at heavily populated Gaza, but both Ashdod and Ashkelon have been demonstrated to be the sites of major Philistine cities, based on the pottery and other material evidence. The ancient gate of Ashkelon, believed to be the oldest remaining arched gate in the world, is shown in the image above. It dates to the Canaanites of the Midddle Bronze Age, before the Philistines arrived in the Iron Age, and was thus in existence during the Philistine settlement.

Archaeologists have been able to locate what they believe are the cities of Gath and Ekron, based on their large geographical footprints and the prevalence of Philistine artifacts. Gath is associated with the over 100 acre site at Tel es-Safi, just south of the Elah Valley. 8 km to the north is Tel Mikne, believed to be the site of Ekron.

Unlike the first three cities mentioned that sit on the Mediterranean coast, Gath and Ekron lie between the coastal plain and the Judean highlands. Thus in the biblical story, the ark would have been carried from battle to the Philistine coast, passed to Gath, along to Ekron and then sent east to Beth Shemesh in the Shefela region between the coast and the Judean hill country.

In the Bible, returning the ark of the covenant was sufficient to end a plague of hemorrhoids. For the rest of us: