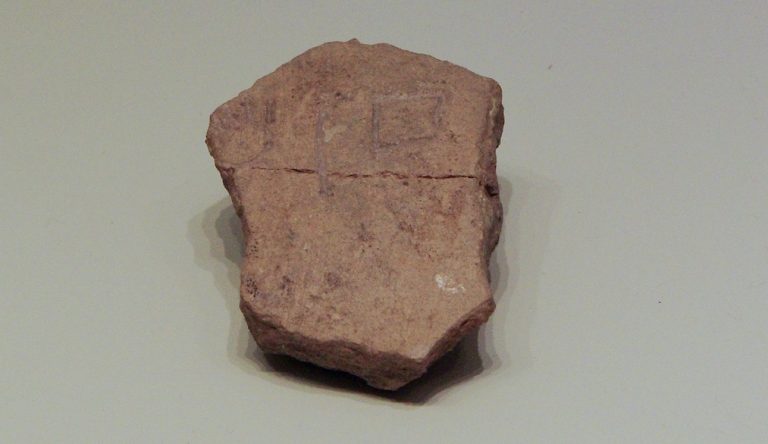 The Proto-Sinaitic inscriptions from Serabit el-Khadim in the Sinai from the 19th-18th century are perhaps the earliest form of strictly alphabetic writing, but there is still a degree of distance between the Proto-Sinaitic alphabet and the Phoenician / Paleo-Hebrew alphabet that was well established in Canaan by the end of the 2nd millennium BCE. There are examples of the use of alphabetic writing in Egypt in the early 2nd millennium BCE, but this alone would not demonstrate how the alphabetic text was adopted in Canaan.

The land of the Philistines is the region along the southwestern edge of Canaan, pushing north and east. Artifacts found at two cities along the edge of this region are important in bridging the gap between the Proto-Sinaitic alphabet and the later Phoenician / Paleo-Hebrew alphabet.

At Gezer, archaeologists discovered a 17th century BCE pottery sherd with the letter sounds of K-L-B written in proto-Canaanite letters. This demonstrates that the early alphabet migrated north from the Sinai into Canaan.

Another inscription from the border region of the ‘land of the Philistines’ was discovered at Lachish. This pottery sherd contains the letters ayin, bet, and dalet, to spell ‘bd, based on the letters that represent eye (ayin), house (bet) and door (dalet). This inscription dates to the 15th century BCE, and is a later example that demonstrates the acceptance of an alphabetic script in Canaan, the forerunner to the Old Hebrew alphabetic text.

The image above is of the inscription discovered at Gezer, which is on display at the Israel Museum in Jerusalem.