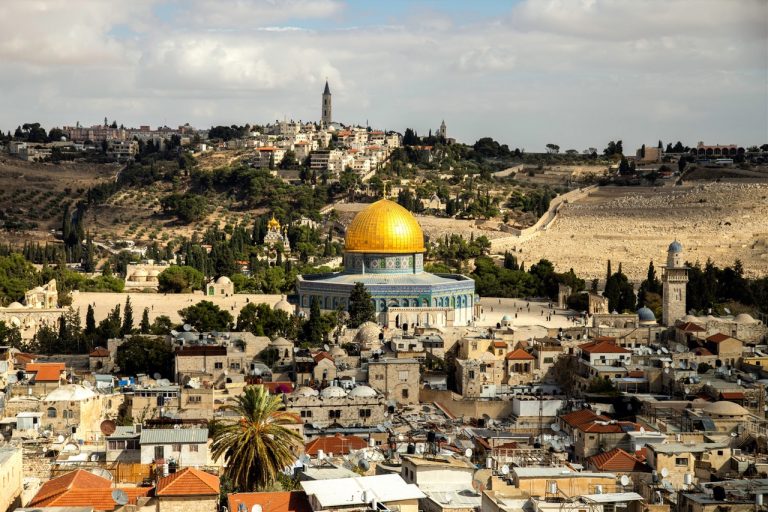 In Exodus 25, God tells Moses: “Tell the Israelites to bring me an offering. You are to receive the offering for me from everyone whose heart prompts them to give. These are the offerings you are to receive from them: gold, silver and bronze; blue, purple and scarlet yarn and fine linen; goat hair; ram skins dyed red and another type of durable leather ; acacia wood; olive oil for the light; spices for the anointing oil and for the fragrant incense; and onyx stones and other gems to be mounted on the ephod and breastpiece. Then have them make a sanctuary for me, and I will dwell among them. Make this tabernacle and all its furnishings exactly like the pattern I will show you.”

In Joshua 18, Joshua followed the biblical instruction and set up the national shrine. “The whole assembly of the Israelites gathered at Shiloh and set up the tent of meeting there. The country was brought under their control.”

Archaeologists and historians can attempt to locate ancient sites based on the geography as described in the Bible. Another method of identification is based on name. The modern site of Khirbet Seilun, an Arabic name, bears a similarity to Shiloh, and thus archaeologists have associated the site with ancient Shiloh, now Tel Shiloh.

Historically, new religious shrines have often been built on the site of earlier shrines. The Pantheon in Rome was converted into a Catholic Church. The Dome of the Rock sits on top of the presumed site of the Temple in Jerusalem. The Babri Masjid mosque in Ayodhya, India was built on a sacred Hindu site.

A similar process occurs in the Bible. In Judges 18, the tribe of Dan established themselves at Laish, and worshipped an idol that Micah had made. In 1 Kings 12, after Jeroboam seceded from the southern kingdom, he set up a shrine at Dan, site of Laish.

Joshua may have been doing the same by setting up the Tabernacle at Shilo.

The site of Tel Shilo appears to have been settled by Amorites in the 18th century BCE, during the Middle Bronze Age. In the Late Bronze Age, the site shows evidence of being a cultic center. There are pit deposits of bones, cultic vessels and an incense stand. The presence of a pre-existing cultic site would be an attractive location to establish a cultic site. For Joshua in the Bible, this could be a driver for choosing a site like Shiloh to establish the Tabernacle.

For an aerial view of the site, see the video below.