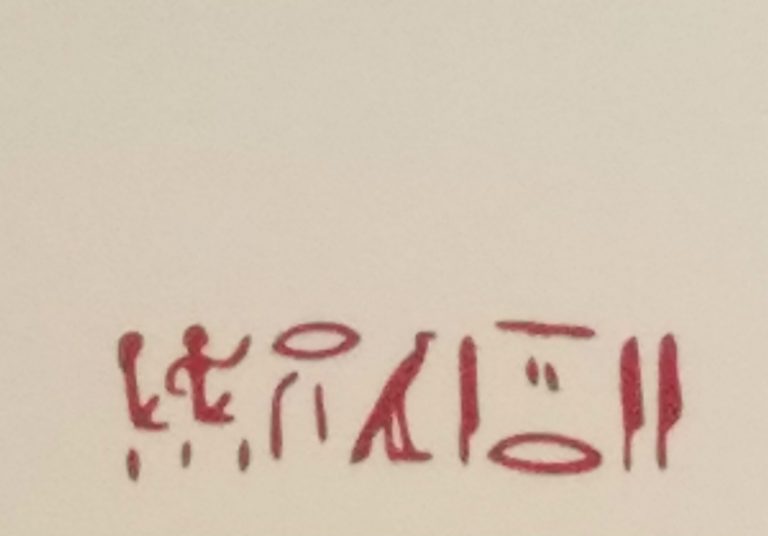 In ancient Egyptian history power swung between kingdoms that were able to unify both Upper and Lower Egypt and intermediate periods during which there was no centralized authority. In the 16th century BCE, the New Kingdom unified Upper and Lower Egypt, and was led by dynastic kings. The 19th Dynasty included one of Egypt’s greatest pharaohs, Ramesses II. Ramesses II was followed by his son Merneptah, who reigned from 1213 BCE until 1203 BCE.

In his fifth year as pharaoh, Merneptah defeated the Libyan king and had a large stone monument, a stele, built to commemorate his victory. As the Merneptah Stele reads, “His victories are published in all lands, to cause that every land together may see, to cause the glory of his conquests to appear; King Merneptah, the Bull, lord of strength, who slays his foes, beautiful upon the field of victory…”

While most of the monument is focused on his Libyan victory to the west, at the end it turns its focus to the northeast: “The princes are prostrate, saying: Mercy!…Plundered is the Canaan with every evil; Carried off is Ashkelon; seized upon is Gezer; Yanoam is made as that which does not exist; Israel is laid waste, his seed is not;”

The Merneptah Stele, from 1209 BCE, contains the first clear mention of an entity called Israel outside of the Bible. Merneptah boasts that he wiped Israel out entirely – “its seed is not.” But this appears to be an exaggeration, as Israel clearly was not laid waste, and its seed was.

The hieroglyphs indicate that Israel refers a people, and not a land mass, suggesting that they had not been settled for a long time. And the time frame falls within a window in which some estimate an exodus from Egypt could have occurred. If Israel was already in the land, and wandered for 40 years before getting there, an exodus could have occurred during the previous pharaoh Ramesses II’s reign.

Egyptian hieroglyphs could represent an entire word, a syllable, a letter or be a determinative that indicated meaning. In the case of Israel, it is constructed of letters.

The name Israel can be read from the image above, taken from the Merneptah Stele. Starting at the right, the two reeds represent the letter Y. The line to the left of the Y is a door bolt and the letter is Z. Below that is a mouth, the letter R. The single reed is an I. The vulture is an A, and the mouth is an R. The man and woman sitting are determinatives, to show that Israel is a people, not a land area, and the three scratches below explain that this is a sizeable population, not just a small group.

Together the letters spell Y-Z-R-I-A-R.

The Merneptah Stele is on display at the Museum of Egyptian Antiquities, also known as the Egyptian Museum, in Cairo, Egypt. It is cataloged as JE (Journal d’Entrée) 31408.