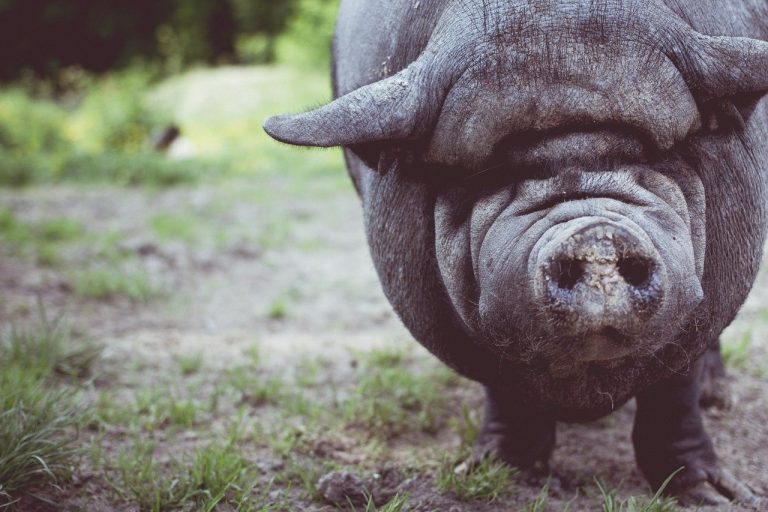 In Deuteronomy 14, Israel is given a set of dietary restrictions. “Do not eat any detestable thing. These are the animals you may eat: the ox, the sheep, the goat, the deer, the gazelle, the roe deer, the wild goat, the ibex, the antelope and the mountain sheep. You may eat any animal that has a divided hoof and that chews the cud. However, of those that chew the cud or that have a divided hoof you may not eat the camel, the rabbit or the hyrax. Although they chew the cud, they do not have a divided hoof; they are ceremonially unclean for you. The pig is also unclean; although it has a divided hoof, it does not chew the cud. You are not to eat their meat or touch their carcasses.”

One of the factors that archaeologists study in analyzing a habited site is the makeup of the diet. The types of animals consumed can be seen through animal bone remains, and human bite marks in animal bones.

During the Late Bronze Age, pigs formed part of the Canaanite diet in the southern Levant. But in the subsequent Iron I period, during 12th and 11th centuries, Israelite sites in the central hill country of Canaan are notable for their lack of pig bones, indicating that pig was not part of these settlers’ diets. This practice of pig avoidance extends into Canaanite and Aramean sites. The reason for the pig taboo is unclear. Some have argued that the pig taboo could relate a biblical prohibition of eating pork, but that would not entirely explain why the practice appears in non-Israelite sites.

The lack of pig in the Israelite diet stands in sharp contrast to the Philistine cities along the southwest coast of the Levant during the Iron I period. In the major Philistine population centers, pigs made up a larger portion of the local diet than the sheep, goats and cattle that were more typical of the region.

There may be a number of reasons for this. The Philistines are believed to have migrated to the southern coastal Levant during the Late Bronze Age collapse. Pigs are a good source of protein. They reproduce quickly, are omnivorous and gain weight quickly. Pigs have robust digestive systems and can eat foods not fit for human consumption. These factors allow pigs to survive a sea voyage and make them ideal for traveling with and settling in a new region.

Studies of DNA extracted from pig bones demonstrate the Philistines’ foreign origins. In the Late Bronze Age, pig DNA in the Levant demonstrate that the pigs were of local origin. But in the Iron Age, European pigs came to dominate the landscape, a feature consistent with modern day wild pigs in Israel. This shift is likely a remnant of the Philistine migration and diet choices.

A modern day example of pigs’ usefulness in converting food waste into protein can be seen just outside of Las Vegas: