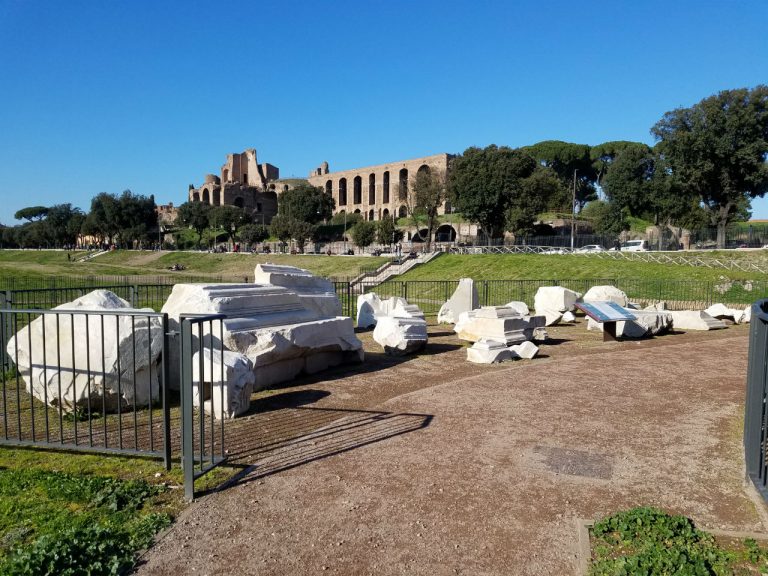 Circus Maximus was a stadium designed for chariot races with a capacity of two to three times more people than the Colosseum. It had a long oval shape, with a long narrow infield that the chariots circled. In modern times, the presence of a triumphal arch at the stadium was suspected, but not certain.

Though no arch survived intact, it did appear in ancient art. A stone relief from the 3rd century CE depicting a chariot race at the Circus Maximus shows a triumphal arch in the background. This relief can be viewed today at the Museo di Palazzo Trinci in Foligno, Italy.

In the 9th century CE, a Swiss monk toured Rome and recorded his findings in the ‘Einsiedeln Itinerary’ as a guide to this important Christian city. The guide records that at the Circus Maximus, an inscription on a triumphal arch proclaimed that “The Senate and People of Rome [dedicate this arch] to the Emperor Titus […], because by his father’s counsel and good auspices, he conquered the people of Judaea and destroyed the city of Jerusalem, which all of the generals, kings, and peoples before him had either failed to do or even to attempt.”

Based on the layout, the arch would have stood at the entrance to the Circus Maximus, and people would enter through the arch to attend the races. In 2015, the images shown in art and long held suspicions were validated when archaeologists unearthed the remains of this second Arch of Titus. This arch stood nearly 50 feet high and 56 feet wide, and was larger than the Arch of Titus in the Roman Forum. Fragments of this arch, seen in the photo above, can be seen today in the remains of the Circus Maximus in Rome.