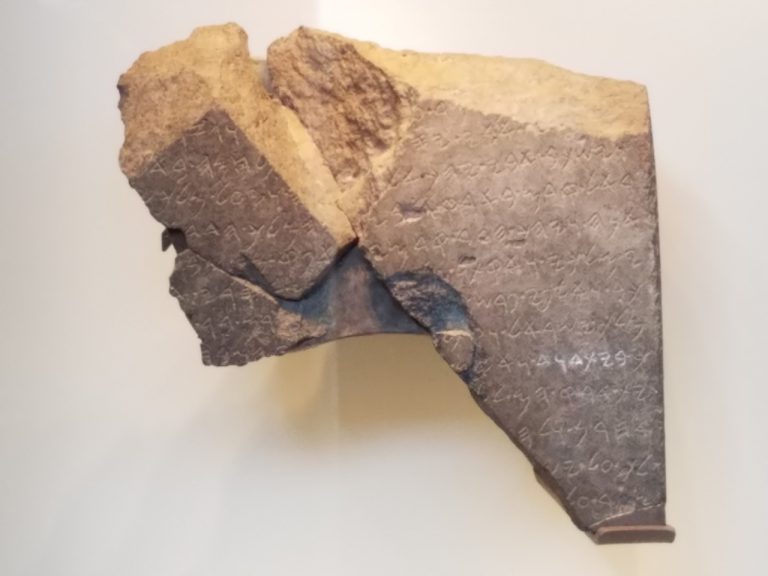 Numbers 31 recounts Israel’s victories over Midianite kings. Numbers 32 mentions that the Gadites and Reubenites agreed to participate in Israel’s invasion of the Cisjordan. In Numbers 33, God gives Moses instructions for Israel’s coming invasion of Canaan. While these chapters recall and anticipate Israel’s victories in war, a monument to a war that Israel and Judah lost is one of the most important pieces of archaeological evidence for reconstructing a Davidic kingdom.

In 1 Kings 12, Jeroboam led the ten northern tribes of Israel to secede from King Solomon’s son Rehoboam’s kingdom. To rival the southern Kingdom of Judah, Jeroboam established temples at Dan and Beth-El. Where these two kingdoms began as rivals, they eventually settled their differences and worked as allies.

In the 9th century BCE, Israel’s principle rival became its northern neighbor, the Kingdom of Aram. Both 1 Kings and 2 Kings record a series of wars between the two sides.

One of those wars appears to have been recorded in what is known at the Tel Dan Stele. The Tel Dan Stele consists of fragments of a once larger monument. It survived from antiquity with various pieces being placed in the construction of an ancient stone wall. The inscription was written in Aramaic, indicative of Aramean origin. The script appears to be written in a 9th century BCE Phoenician alphabetic text, giving an approximate time frame for its creation.

In 2 Kings 8, Hazael killed the Aramean king Ben-Hadad and became king in his place. Hazael waged war against the king of Judah Ahaziah son of Jehoram and the king of Israel Joram the son of Ahab at Ramoth Gilead. In the Bible’s account, Hazael’s forces wounded Joram, so Joram returned to Jezreel to recover from his wounds. Later, both Ahaziah and Joram were killed by Jehu.

More important for the recreation of the southern Kingdom of Judah is the Tel Dan Stele’s reference to [Ahaz]iahu son of [Jehoram kin-]g of the House of David. This is the first clear reference to a King David. The term “House of” denotes a kingdom, similar to the “House of Israel” in Ezekiel 28 and Amos 9. Thus the Tel Dan Stele records the existence of a kingdom connected to a David.

This places the figure of David in history as the head of the kingdom. The nature of that kingdom is much debated, but it anchors David in history, a step required to argue for David as a king of an extended tribal alliance.

The image above is of the Tel Dan Stele, on display at the Israel Museum in Jerusalem.