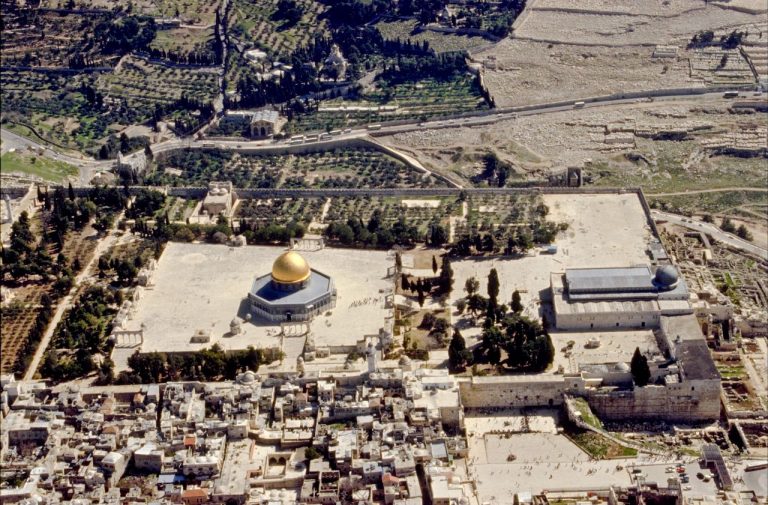 In Deuteronomy 12 Moses gives Israel extended instructions on the importance of centralized worship. “But you are to seek the place the Lord your God will choose from among all your tribes to put his Name there for his dwelling…Then to the place the Lord your God will choose as a dwelling for his Name, there you are to bring everything I command you: your burnt offerings and sacrifices, your tithes and special gifts, and all the choice possessions you have vowed to the Lord…Be careful not to sacrifice your burnt offerings anywhere you please. Offer them only at the place the Lord will choose in one of your tribes, and there observe everything I command you.”

After the central shrine first settled elsewhere, this “place the Lord will choose” eventually became Jerusalem.

Despite a lack of evidence, logic would dictate that the city had a Temple during the Iron Age. Archaeology demonstrates that Jerusalem was a major city, certainly by the end of the 7th century BCE. The Assyrians and Babylonians record assaults on the city, which attests to city’s importance. In the region, large cities had centralized temple areas on the high ground and there is no reason to suspect that Jerusalem was any different.

Numerous books of the Bible, written at various times, mention the Temple. It is referenced in the Book of Kings. Isaiah 2 mentions the Temple, as does Jeremiah 17. Centralized worship is an important element of the stories of kings Hezekiah and Josiah.

Along the same lines, there is no overt evidence for King Solomon in archaeology, but logic would dictate that he was a historical figure and the one who build the First Temple in Jerusalem.

There can be any number of reasons for a lack of overt references to King Solomon. Records may not have survived the ravages of time or may simple have not been found.

Despite the lack of evidence, there is little reason to question that the Temple was built by anyone but King Solomon. There is nothing in Deuteronomy to suggest that Jerusalem is the site that God would choose, and a Temple in Jerusalem would be associated with a dynasty connected to Jerusalem. If a later king would have built the First Temple, he would likely want credit for such an accomplishment. In Egyptian records, kings often erased the name of the earlier pharaohs and replaced it with their own, to take credit for building projects. With the First Temple, credit is assigned and held with the earlier king, King Solomon.

Thus even without overt evidence, the signs point to a King Solomon having existed and having built the First Temple.