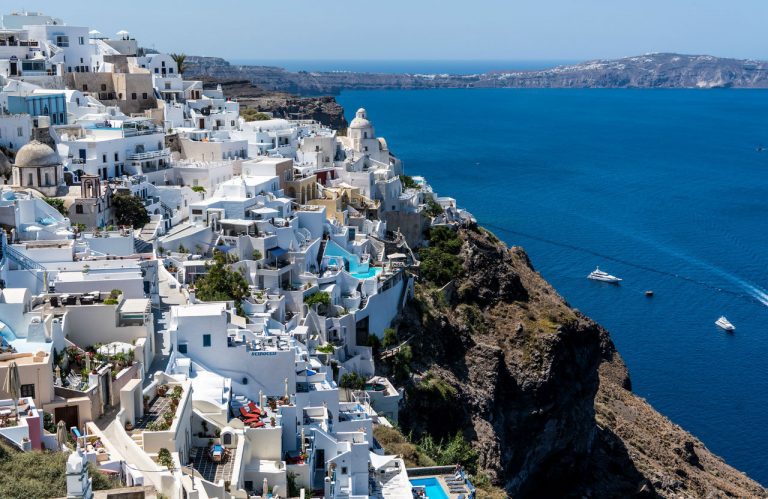 In Deuteronomy 9, Moses reminds Israel how he has intervened on Israel’s behalf to plead for mercy from God. Moses reminded God that “they are your people, your inheritance that you brought out by your great power and your outstretched arm.” In Exodus 6 Moses had told the Israelites that God “will bring you out from under the yoke of the Egyptians, will free you from being slaves to them, and will redeem you with an outstretched arm.” In Exodus 15, after God split the sea, Israel acknowledged that God’s outstretched arm had saved them. “Your right hand, Lord, was majestic in power. Your right hand, Lord, shattered the enemy.”

Santorini is an island in the Aegean Sea. It lies north of Crete, Greece’s largest island. Santorini is also known as Thera, and is the site of one of the largest volcanic eruptions in recorded human history.

In the early 2nd millennium, Santorini was a large island. When the volcano exploded, it left three islands, Therasia, Aspronisi, and the largest island Thera, and a massive crater in the center that was filled in by the waters of Aegean Sea. The image above shows the edges of the islands and a body of water where a mountain once stood.

The volcanic eruption deposited thick layers of ash across the surrounding islands. Ash landed as far away as Egypt and Canaan. The tsunami in its wake toppled walls of buildings in surrounding islands, causing especially significant damage on the northern coast of Crete.

The Thera Eruption is important for archaeologists as it established a relative chronology across the region. It could be determined that the level immediately beneath the ash that was demonstrated to have been active at the time, across the affected area, all were of the same time period.

If the ash layer helped establish a relative chronology, establishing a set date for the eruption has been more challenging. Studies based on pottery styles place the date of the eruption in the mid 16th century BCE. Radiocarbon dating of an olive tree found beneath the lava would place the event in the last quarter of the 17th century BCE, though the chemistry may have been disturbed by the extreme conditions of the volcanic eruption. Radiocarbon dates from other sites in the Aegean range from the mid 17th to late 17th century BCE. Studies of ice layers in Greenland proved inconclusive. But tree ring studies in the US and Europe show interference in growth in 1629-1628 BCE, possibly the result of ash in the atmosphere obscuring the sun.

The Thera Eruption has been offered as a rational explanation of the splitting of the sea story in the Bible. The suggestion is that as the Israelite slaves were escaping Egypt, the tsunami triggered a retreat of the waters followed by a massive wall of seawater. A similar pattern was seen in the 2004 Indian Ocean tsunami that killed over 200,000 people, when the waters retreated at the beaches and then returned with the tsunami wave.

The problems with this suggestion are manifold. The logistics of how and where this would have happened are hard to work out. The odds that the Israelite slaves escaped at this exact moment and time would make it truly fortuitous. And that is before addressing this issue on the timeline relative to findings of the proto-Israelites in Canaan.

With that it mind, enjoy a short clip about this volcano: