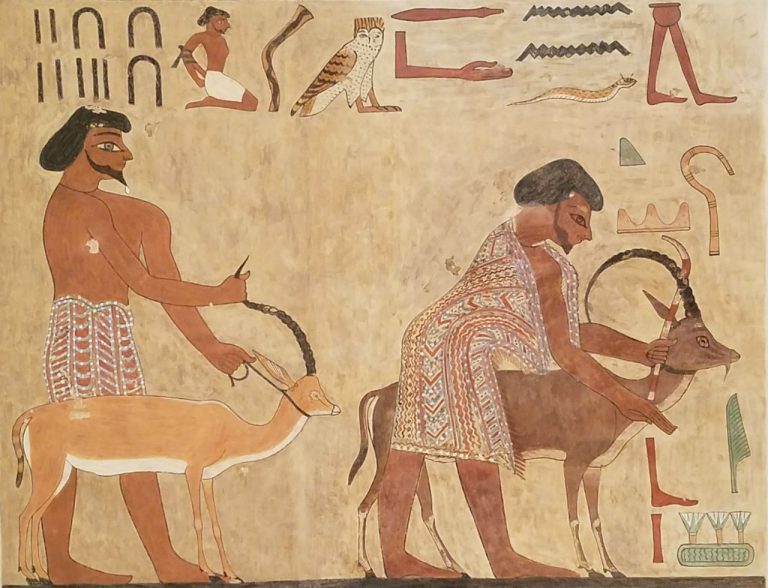 The Joseph story and David story contain the richest character development and emotional depth of all the stories in the Bible. Genesis 37 opens with the seventeen year old Joseph the favorite son of Jacob. Jacob made Joseph a “K’tonet Pasim,” an unusual term that is translated as “a coat of many colors.” Joseph’s brothers were jealous of him, and they kidnapped him and sold him into slavery. To throw Jacob off the scent of the case, the brothers killed a goat and dipped Joseph’s multi-colored coat into goat’s blood. The brothers presented the coat to Jacob, and Jacob was convinced that an animal killed Joseph, leaving the brothers to be presumed innocent.

Egypt’s vast wealth agricultural wealth helped connect it to the world and brought in many non-Egyptians. Non-Egyptians could settle in Egypt, attracted by the steady food and water supply, especially in times of drought. Traders arrived from as far away as Afghanistan and southern Africa looking to exchange goods that were not available in Egypt, such as lapis lazuli and ivory. Egypt’s powerful army engaged in wars and brought captives back to Egypt.

In Egyptian art, Egyptians and foreigners and depicted differently. Nubians and sub-Saharan Africans are shown with African features. Egyptians are commonly shown to be bald headed, a measure that would have been taken to counter lice. Asians, a term that can refer to Semitic language speaking people of Canaan, are shown to have lighter skin than the Egyptians and the men are depicted with long beards.

Another difference between the groups is in the clothes. The material used for clothing was a function of what was available in each region. Flax grew in abundance around the Nile River, and its fibers could be spun to produce clothing. Flax, which is the material used to produce linen, is not very receptive to dyeing, so in art, Egyptian men often appear wearing white skirts. In the Levant, the region tucked between Anatolia and Egypt, there were many pastoral farmers who raised sheep, and thus they had wool to make clothing.

Beni Hasan is the site of ancient Egyptian tombs that date to the late 3rd millennium and through the 17th century BCE. It is roughly 150 miles south of Cairo. One of the tombs belongs to Khnumhotep II, a 19th century BCE administrator of a region of Egypt.

Painted on the walls of the Tomb of Khnumhotep II is an image of Semitic traders. It is notable because it demonstrates that Semitic people were actively engaged in trade deep into Egypt. The Semitic group members are depicted as having long hair, the men with beards, and most interestingly for the comparison to the Joseph story, they are wearing multi-colored clothing.

The image above shows two of the traders out of a larger group. This facsimile was painted in 1931 and is displayed at New York’s Metropolitan Museum of Art. Because the actual Tomb of Khnumhotep II has been open to the elements since its discovery, this painting may today better reflect the original colors than the tomb itself in Egypt.