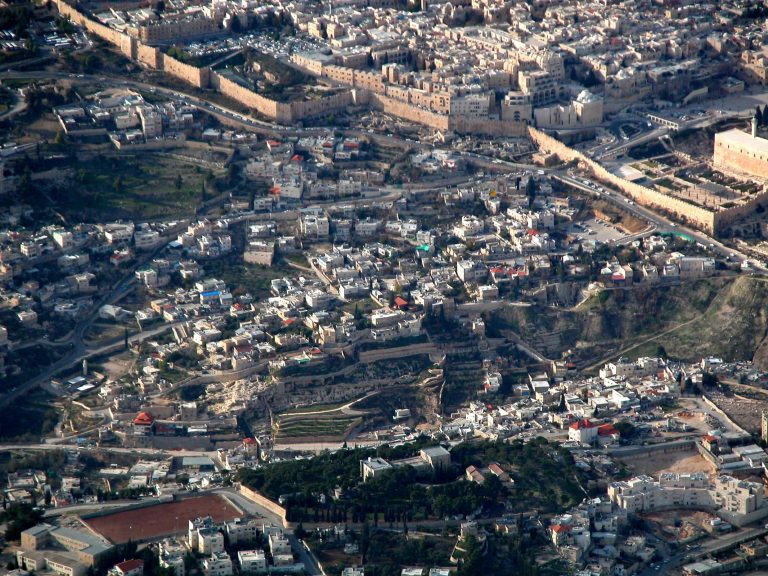 As Moses began to transition power to Joshua, he had a request from God: “Let me go over and see the good land beyond the Jordan—that fine hill country and Lebanon.” But because of you the Lord was angry with me and would not listen to me. “That is enough,” the Lord said. “Do not speak to me anymore about this matter. Go up to the top of Pisgah and look west and north and south and east. Look at the land with your own eyes, since you are not going to cross this Jordan. (Deut. 3)

A lack of fortifications or royal architecture in the Late Bronze Age is one of the limiting factors for studying the archaeology of Jerusalem. But this is only one of the factors that complicate efforts to study Jerusalem’s history.

Much of old Jerusalem is built over. Both the City of David and the Temple mount sit under structures and are politically difficult to analyze.

Archaeological research in Israel has benefited from the existence of ‘tells,’ or mounds. These mounds, typically near a water source, were built up over time. Each subsequent layer covered up the previous settlement, locking in the artifacts of the earlier time period. The area of the City of David is believed to have been the original city of Jerusalem. The site sits between two valleys, both of which were once steeper. Much of the construction on the hill was not built over earlier layers. Instead, the ground appears to have been cleared to the bedrock, removing evidence for earlier settlement periods.

In the Bible, Jerusalem became contested ground during invasions by King David, by the Egyptian pharaoh Shishak, by the coalition of Rezin king of Aram and Pekah son of Remaliah, king of Israel, by the Assyrian king Sennacherib, and by the Babylonians led by Nebuchadnezzar. However, only the invasion by the Babylonians appears to have left a clear destruction layer. Without evidence of the earlier destruction layers, it is hard to establish a clear timeline.

Because of the paucity of evidence, the status of Jerusalem in the late 2nd millennium and early 1st millennium BCE cannot be firmly argued from an archaeological perspective. All that can be said is the combination of evidence that debris was removed to the bedrock and lack of destruction layers is that uncertain interpretations are a known unknown.

This uncertainty means that the Jerusalem of the Iron IIA period remains at the center of the debate around timing as it relates to the biblical stories.

The image above is of the City of David taken from the east.