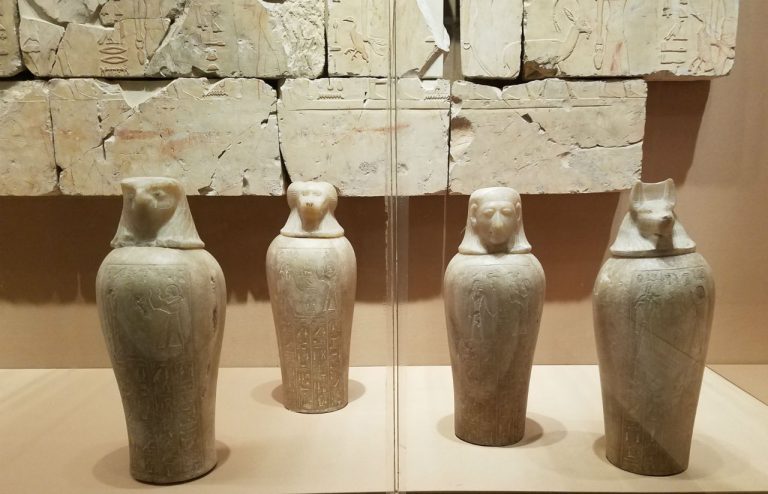 At the end of the book of Genesis, Jacob’s life has come full circle. His was a life of turmoil from family. His brother wanted to kill him, his father-in-law cheated him and his sons sold his favorite son into slavery. But at the end the family was reunited and he was at peace.

Jacob issued his final request, to be buried with his ancestors in the Cave of Machpelah, and passed away. “Joseph threw himself on his father and wept over him and kissed him. Then Joseph directed the physicians in his service to embalm his father Israel (Jacob’s other name). So the physicians embalmed him, taking a full forty days, for that was the time required for embalming. And the Egyptians mourned for him seventy days.”

The ancient Egyptians believed that a human was made up of different component parts. These parts included: the physical body, the person’s shadow, the name, and spiritual parts called the ka, ba and akh. The differences between ka, ba and akh are nuanced, but importantly for the Egyptians, the spirits lived on after death.

In order to provide this connection to the spirits, Egyptians preserved dead bodies through mummification. During the ancient Old Kingdom period, the afterlife was the strict reserve of royalty, and only royalty was mummified. Over time the afterlife was opened up to commoners, and the practice of mummification became more widespread.

Mummification was designed to preserve the body without disturbing its form. The goal was to dry the body and prevent decomposition.

The first step in the process was removing the brain. The brain was not viewed as essential after death, though certainly there would have been those in life who would have suggested a certain individual’s brain was not essential when they were alive either.

The internal organs were removed and dried. The heart was viewed as being responsible for functions that we today associate with the brain and was returned to the body. The lungs, intestines, stomach and liver were dried and then stored inside canopic jars.

Each of the jars had covers in the shape of different sons of the god Horus.

The full body was covered in salt to fully remove the moisture. The body was stuffed with linen, sand or sawdust to restore its shape after the various parts had been removed. On day 70 after death, the body was then wrapped and placed in a coffin, and finally placed in its tomb. In the Jacob story, this translates to Jacob being buried on the 70th day, when the embalming and mourning were complete.

The four canopic jars used in the mummification process and pictured above are on display at the Brooklyn Museum.