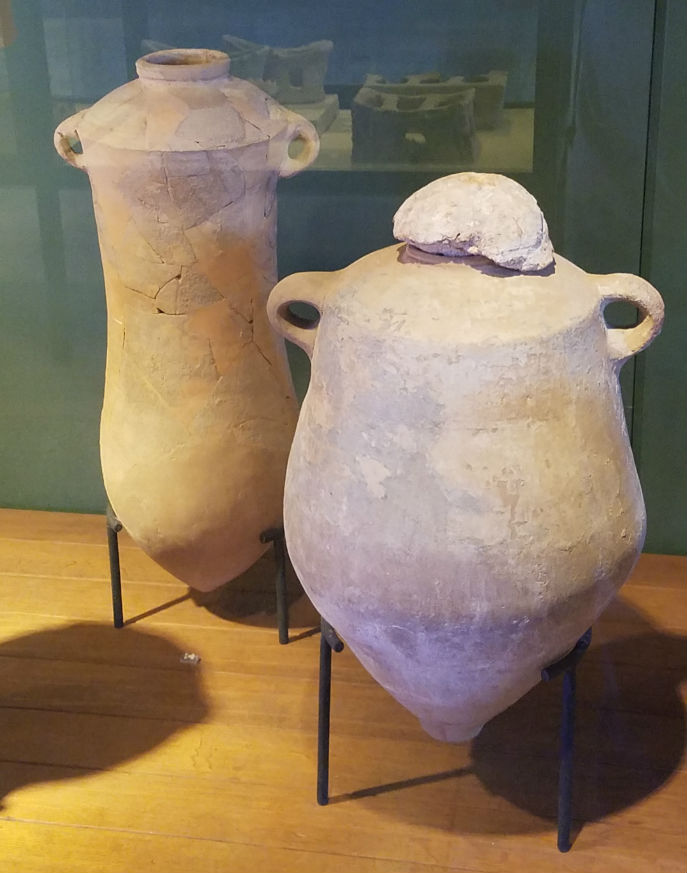 In Numbers 4, the Kohathite branch of the Levites is given the responsibility of dismantling the traveling tabernacle and carrying it and its accessories when Israel traveled. In order not to touch the holy objects, the Kohathites are told to cover them. They are to do this for the sacred objects including the plates, dishes and bowls, jars for drink offerings, jars for olive oil and the sprinkling bowls. In addition to the physical building, jars figure prominently in the list of sacred items.

The purpose of the collared rim jar is the subject of debate. Because it appeared in areas with little water, it is argued that it was used for water storage. But it also appeared in areas with plentiful water, so the argument goes that the jars were used for storing olive oil and wine. Elsewhere, collared rim jars were shown to store food such as lentils, chickpeas, wheat, barley and spices, acting as an all purpose storage jar. The jars were used in long distance trade, though they are not light, weighing roughly 30 pounds each.

During the Late Bronze Age these collared rim jars are found north of the Samarian hills. But in the Iron Age I, these jars become highly prominent in the Transjordan and in the hill country area of Canaan, ranging from Hebron in the south to the lower Galilee in the north. In the hill country they constitute a large percentage of the pottery. Notably, these jars are prevalent in villages where there are four-room houses, commonly an indicator of an early Israelite site. At the same time, they are rarely found in the Upper Galilee, primarily home to the Canaanites, or in the Philistine areas along the southern coastline.

The collared rim jar, while not uniquely Israelite, does appear to be indicative of Israelite presence and an Israelite cultural marker, especially when found in combination with the four-room house.

The collared rim jars shown above are on display at the Eretz Israel Museum in Tel Aviv.