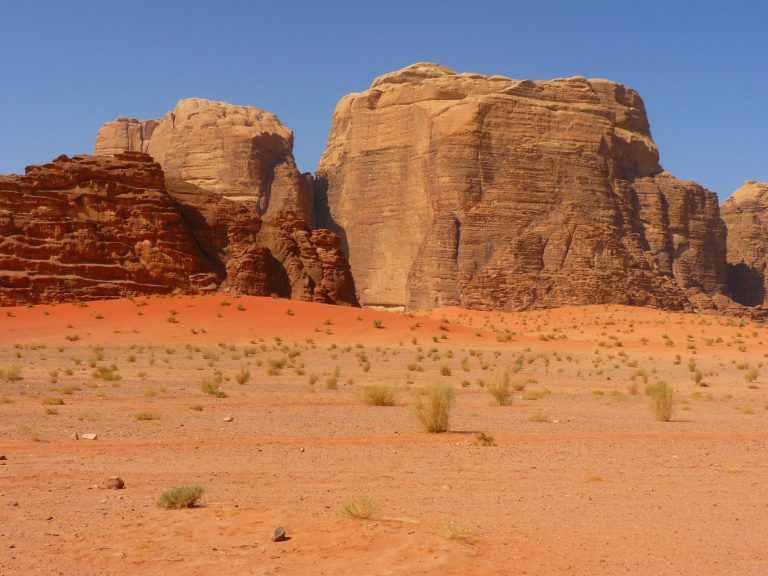 In Deuteronomy 1, Moses recounts Israel’s setting out from Horeb, or Mt. Sinai, on its way to the promised land. But when the spies toured the land and reported that it was unconquerable and the nation complained, God punished them by not allowing them to enter the land. Instead, in Deuteronomy 2, they set out for the hill country of Seir, towards the area of southern Jordan today.

In the biblical story, this was a region that Moses had traversed before. In Exodus 2, after killing an Egyptian, Moses fled to Midian, the area of northern Arabia, adjacent to southern Jordan. The exact site of Mt. Sinai is unknown, but following Moses’ travels, it would lie somewhere between northern Arabia and Egypt.

In ancient polytheism, there were many gods. These gods served a wide array of functions and regions. Some gods could be more global in nature, perhaps creating the world, others could be responsible for weather, some for an afterlife, while others could be a local gods. The Assyrian Empire took its name from its ancient capital Ashur, which was the name of the dominant local god in that city.

In Exodus 3, Moses sets out from Midian and encountered a burning bush that was not being consumed by the fire. Moses asked God for his name. God said to Moses, “I am who I am. This is what you are to say to the Israelites: I am has sent me to you…this is my name forever, the name you shall call me, from generation to generation.”

The tradition that God was from this region between Arabia and Egypt is known elsewhere in the Bible. In Judges 5, the Song of Deborah, it writes “When you, Lord, went out from Seir, when you marched from the land of Edom, the earth shook, the heavens poured, the clouds poured down water.” In Habbakuk 3, “God came from Teman,” Teman being a tribe of Edom, again in the vicinity of southern Jordan and northern Arabia.

The idea that the God of the Bible originated from the area of northeast Sinai, southern Jordan and northern Arabia, may be indicated from the archaeological record.

The Temple of Amenhotep III at Soleb in Nubia is located about 300 miles south of Aswan in Egypt, in modern day Sudan. A cataract in a river is a site where the water is interrupted by heights that can produce waterfalls or by stones that disrupt the smooth flow of water and Soleb sits south of the Third Cataract of the Nile River. The temple represents the southern reach of the 14th century BCE pharaoh Amenhotep III.

The large stone columns that lined the temple recorded Amenhotep III’s conquests and people under his authority. One of the tribes on the list are the Shasu of YHW, an apparent reference to a nomadic people and a location. The Shasu of YHW are mentioned near Seir in the same list, suggesting they were in close proximity to each other.

The name YHW bears a close similarity to the letters of God’s name in the Bible. As towns could be named for the local god, it raises the possibility that the God of the Bible was known in the region of Seir, roughly in the vicinity of southern Jordan, pictured above, as the Bible indicates.