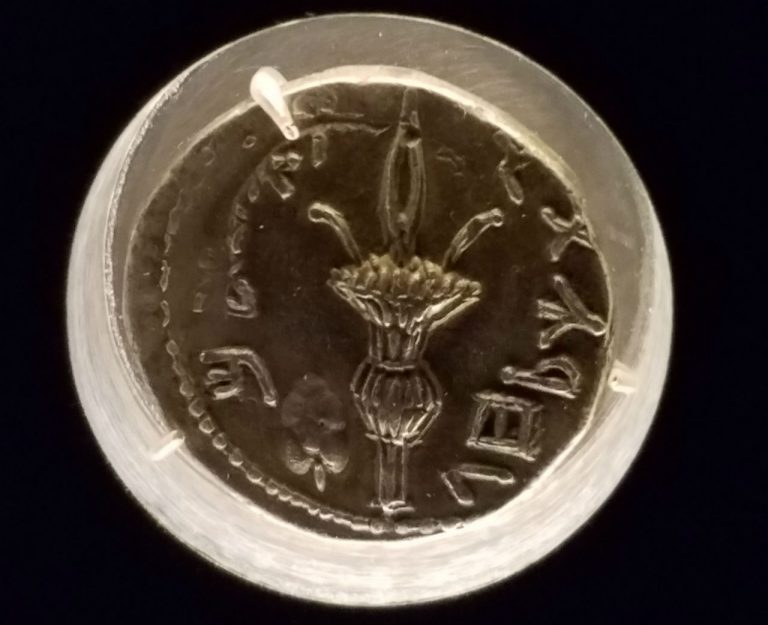 The ‘arba minim’ are taken on the celebratory holiday of Sukkot. But at times in Jewish history these four species were a trigger for civil war and a symbol of revolt.

Leviticus 23 lists the annual holidays. “On the fifteenth day of the seventh month…you shall celebrate the feast of the Lord seven days…And you shall take on the first day the fruit of splendid trees, branches of palm trees and boughs of leafy trees and willows of the brook.” ‘Pri etz hadar,’ the “fruit of splendid trees” is interpreted to mean a citron, also known as an etrog.

In the year 164 BCE, the Hasmoneans captured Jerusalem and rededicated the temple, but it took another 25 years before Judea achieved independence from Greece and the Hasmoneans took control of the throne. Yet even as Judea achieved its independence, the populace was fractured. There were schismatic religious groups, the two most prominent being the Sadducees and the Pharisees.

When the Hasmonean Alexander Jannaeus, or Yannai, became king, he also took the position of high priest, a monopoly on power that the Pharisees opposed. He was also reported to have been the son of a captive woman, and therefore should have been ineligible for temple service, according to Pharisaic custom.

Josephus picks up the story in Book 13, Chapter 13.5: “As to Alexander, his own people were seditious against him; for at a festival which was then celebrated, when he stood upon the altar, and was going to sacrifice, the nation rose upon him, and pelted him with citrons [which they then had in their hands, because] the law of the Jews required that at the feast of tabernacles every one should have branches of the palm tree and citron tree; which thing we have elsewhere related. They also reviled him, as derived from a captive, and so unworthy of his dignity and of sacrificing. At this he was in a rage, and slew of them about six thousand.”

Later, Josephus reports, “From thence he fled to Jerusalem, where, besides his other ill success, the nation insulted him, and he fought against them for six years, and slew no fewer than fifty thousand of them. And when he desired that they would desist from their ill-will to him, they hated him so much the more, on account of what had already happened; and when he had asked them what he ought to do, they all cried out, that he ought to kill himself.” The “fruit of splendid trees” led to a less than splendid outcome.

The etrog helped trigger a civil war, but the four species listed also became a symbol of Jewish revolt against Rome in both the First Jewish Revolt which resulted in the Jerusalem Temple’s destruction and in the catastrophic Bar Kochba Revolt over 60 years later. During both wars the rebels minted their own coins to show their independence from Rome. Some of the coins they minted were stamped with the four species that the Torah commands to be taken on the holiday of Sukkot. This Jewish Revolt coin can be seen in the photo above. Many such coins have been found. This one is on display at the Israel Museum in Jerusalem.

So while the four species are taken in part for their fragrant smells and used in celebration, in at least three instance they been connected with something other than celebratory events.