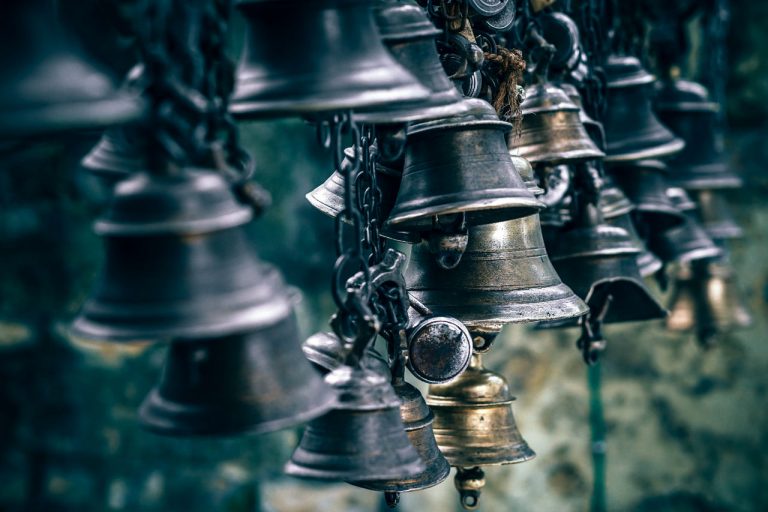 This week’s parshah lists the garments that the priests and high priest wore during the tabernacle service when the nation of Israel was wandering through the desert after leaving Egypt. These laws would have been applied later when the temple in Jerusalem was active. A remnant of one of these garments from the Second Temple period may have been found.

Exodus 28 lists the garments of the high priests. One garment is a robe. “Make the robe of the ephod entirely of blue cloth, with an opening for the head in its center. There shall be a woven edge like a collar around this opening, so that it will not tear. Make pomegranates of blue, purple and scarlet yarn around the hem of the robe, with gold bells between them. The gold bells and the pomegranates are to alternate around the hem of the robe. Aaron must wear it when he ministers. The sound of the bells will be heard when he enters the Holy Place before the Lord and when he comes out, so that he will not die.”

The Temple Mount today serves at the focal point of the Old City of Jerusalem, but the original city lay south of the current city walls, down the hill, in an area today called the City of David. The original town sprouted from this location because it contained a running water spring. To the east of this hill the Kidron Valley runs north past the temple mount. Running west along the hill’s southern edge and then north past the old city is the Valley of Hinnom. Between these two valleys is another north-south valley, the Tyropoeon Valley, that runs just west of the Western Wall.

During excavations along the Western Wall, archaeologists found a golden bell in the area below Robinson’s Arch, in a water channel that drained along the Tyropoeon Valley. The bell itself rings when shaken – not enough to wake the dead, but loud enough that the high priest entering the Holy Place should not die. The loop above the bell indicates that it would have been attached to another object above it, either clothing or jewelry. The channel where the bell was found dates to the late Second Temple period.

The location of the bell puts it in the late Second Temple period, when the temple was still in operation. It is important not to overstate findings in archaeology. The bell could have belonged to any pilgrim or been part of someone’s jewelry, although it would have been a unique piece. But given the description of the high priest’s garments in the Bible, the uniqueness of the piece, and its location near the temple, it raises the possibility that this golden bell may have at one point in time been attached to a high priest’s garments. Time has marched on, so we cannot say definitively for whom this bell tolled, but it may have tolled for the high priest in the Second Temple.

The following video contains more information on the bell and its discovery: