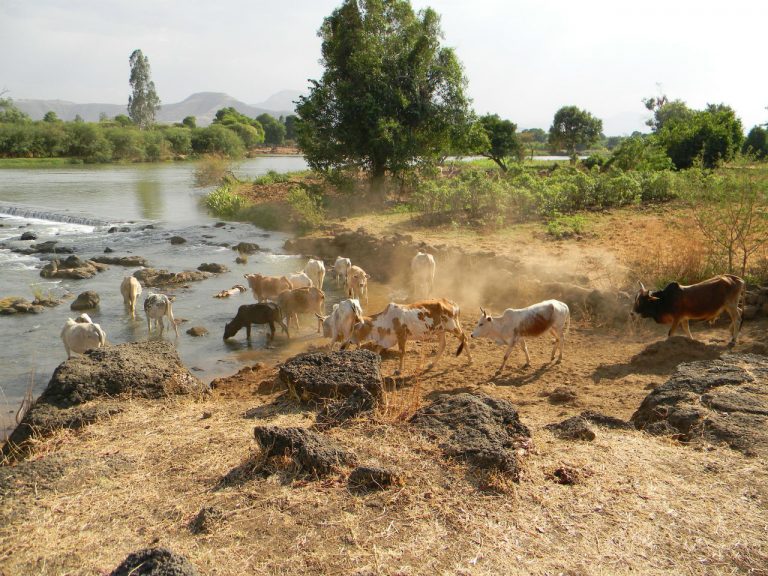 In Genesis 41, Egypt’s pharaoh had two dreams. In his first dream, seven fat cows emerged from the Nile, followed by seven gaunt cows that ate the fat cows. In the second dream, seven healthy heads of grain were devoured by seven thin heads of grain. Joseph was recalled from prison to interpret the pharaoh’s dreams. Joseph explained the dreams to mean that Egypt would experience seven years of plenty followed by seven years of famine. As a result, the pharaoh placed Joseph in charge of Egypt, second only to the pharaoh himself.

Egypt has an arid climate, and in ancient times was wholly dependent upon the Nile River for sustenance. Under normal conditions, the Nile would flood annually, depositing the water and nutrient rich silt on its banks that supported Egyptian agriculture.

The Nile was so important that even Egypt’s seasons were defined by it. June through September was the flooding season, October-February the growing season and March-May the harvesting season.

The Nile has two primary sources: the Blue Nile and the White Nile. The Blue Nile emerges at Lake Tana in Ethiopia, created by July through September rains. The White Nile begins in Lake Victoria at the border region of Tanzania, Kenya and Uganda. The two rivers flow north and meet at Khartoum in Sudan and then continue north through Egypt to the Mediterranean Sea.

The amount of water that fell in the East African highlands determined what the seasons would look like in Egypt. In normal years, the Nile would rise above its banks, depositing water and silt for growing agricultural products. In years in which too much water fell, the Nile would flood the surrounding villages and destroy the farmland. In years of too little rain, the Nile would not exceed its banks, and the result was famine. The fluctuations were so important that it is thought the collapses in Egypt’s centralized government across its history were the result of prolonged droughts.

To predict agricultural output, the Egyptians installed Nilometers, structures that measured the water level of the Nile. The water level measurements would then be used to predict the annual harvest and to determine the amount of tax to be paid. Ancient Nilometers still stand today in various spots along the Nile.

There is a record of a seven-year famine in Egypt.

The Famine Stele was discovered on Sehel Island in southern Egypt. The Egyptian language used points to the Famine Stele being inscribed in the late first millennium, well after the presumed setting for the Joseph story. But it describes a much earlier famine during the reign of the Egyptian king Djoser during the Old Kingdom’s 3rd Dynasty in the 3rd millennium BCE. One line is translated as “In a period of seven years, Grain was scant, Kernels were dried up.” It is unknown if the Famine Stele describes an actual event. Some have suggested that the idea of a seven-year famine was borrowed from the biblical story. But it raises the possibility that a seven-year famine did occur during Egypt’s long history.

An image of the Famine Stele can be seen in the following link: