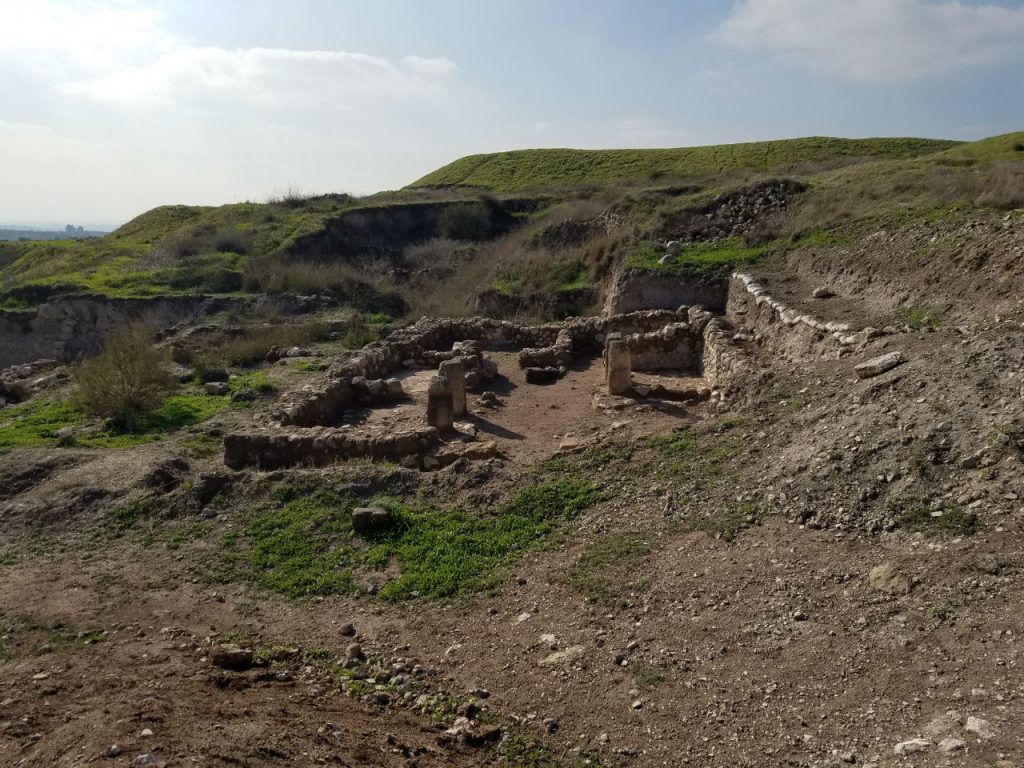 Scientists order time periods in human history based on the types of tools that humans used. From simple beginnings with stone tools, humans learned how to smelt metals. Smelting technology improved and humans learned how to form progressively better tools made from copper, bronze and iron. Thus scientists refer to various periods as the Stone Age, Copper Age, Bronze Age and Iron Age.

In Canaan, the late 13th century BCE to the 12th century BCE is the transition period from Late Bronze Age to Early Iron Age. At the end of the Late Bronze Age, the land was in decline. The Judean and Samarian hill country especially had few established cities or villages. Beginning with the Iron Age, the land experiences a population explosion, with a sharp increase in the number of villages.

These villages have unique properties. They have an unusual home design, commonly referred to as a four room house, the remains of which are shown in the photo above. The pottery is of a lower quality than that found in the surrounding area. And studies of animal remains show that these villagers avoided pig in their diet.

The Merneptah Stele found in Egypt and which dates to the late 13th century places an entity called Israel in the vicinity of the Judean and Samarian hill country. The source of this population and Israel is hotly debated by archaeologists. Wherever they came from, this group known as Israel’s had a specific cultural marker of avoiding pig in its diet.

During the same general timeframe of the transition from Late Bronze to Early Iron, a group known as the Sea Peoples sailed from somewhere in the Aegean Sea, around Greece, and invaded parts of the coastal Mediterranean. The group that landed in the southwestern corner of Canaan was known as the Peleset. They are assumed to be one and the same with the Philistines, who established themselves in five major cities: Ashdod, Ashkelon, Gaza, Ekron and Gath. In contrast to the highland groups, they had higher quality pottery and the remains at the ‘Philistine Pentapolis,’ the five major Philistine cities, show that pig was a major part of their diet.

While many questions are unanswered, the timing and locations of pig remains could be evidence of pig avoidance as part of religious practice, and a sign that the early Israelites and later Judahites would have avoided the McRib sandwich.