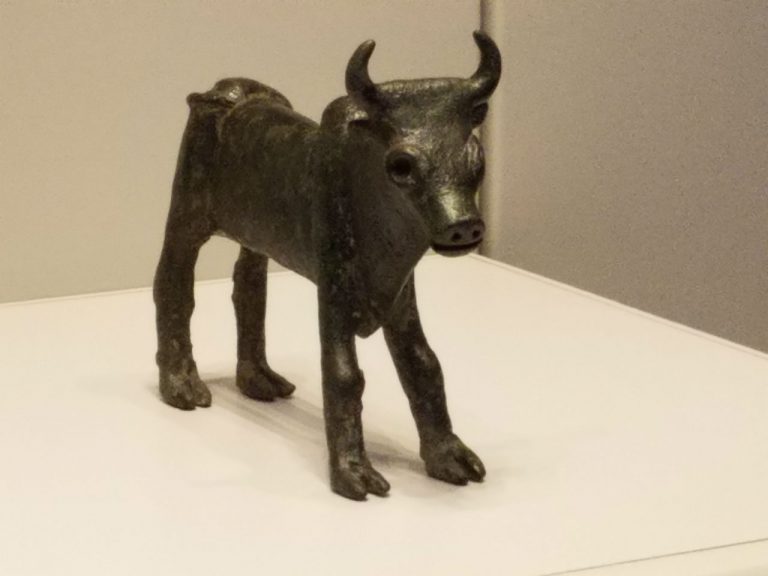 The Torah portion of Re’eh continues Deuteronomy’s theme of the prohibition of worshipping foreign gods. In Chapter 12 it decrees “Destroy completely the places on the high mountains, on the hills and under every spreading tree, where the nations you are dispossessing worship their gods. Break down their altars, smash their standing stones and burn their Asherah poles in the fire. Cut down the idols of their gods and wipe out their names from those places.”

A 5”x7” bronze bull statuette was unearthed near the surface off the hilltop at Tel Dothan. Tel Dothan is located between Jenin and Sebastia, formerly known as Samaria and the ancient capital of the northern kingdom of Israel. Pottery on the Tel Dothan site dates the find to roughly 1200 BCE.

This bull statuette is one of the largest found in the entire Levant, and highlights the bull’s importance. To the Canaanites, the bull was symbol for the god Baal, the storm god, the most powerful god in the pantheon and the son of the god El. A similar bull was found at Hazor dating to the Late Bronze Age, when it was a Canaanite site.

Cattle could be an important symbol for Israelites as well. In the Bible, when Jeroboam led the ten northern tribes to form the northern Israelite kingdom, he established temples at Dan in the north and Bet El to compete with the temple in Jerusalem. Jeroboam also placed golden calves in each temple, perhaps to appeal to local tastes. At points in time, the Israelites are also said to have adopted Canaanite religious practices, including the worship of Baal.

Archaeologists disagree as to whether this was a Canaanite site or an Israelite site. The presence of a bull could argue for either group.

Beyond the bull statue, the site was found to have even greater importance. The bull was found near the top of the hill. The hilltop did not have evidence of residential settlement, as it had none of the typical foundations or walls of homes. However, archaeologists found a stone wall over 70 feet in diameter that encircled the top of the hill. In one area, it had a large rectangular stone, possibly a ‘matzevah,’ or ‘standing stone,’ that is found at numerous cultic sites. A pottery fragment matched an incense burner that was similar to cult objects found at other locations.

The Tel Dothan site then appears to have been a ‘high place,’ a Canaanite site that Israel would have been commanded to destroy, or an Israelite one in violation of the biblical rule.

This bull statuette can be visited at the high place that is the Israel Museum in Jerusalem.