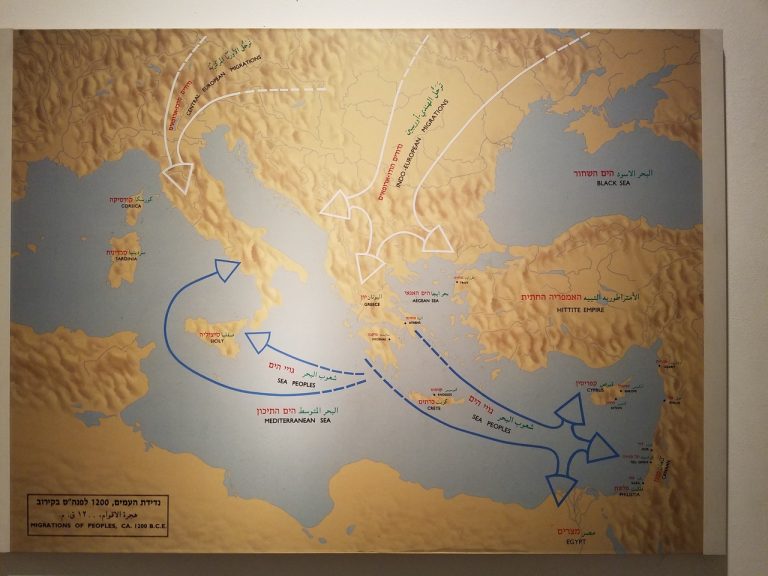 Around the time of Israel’s appearance in Canaan in the late 13th century, the eastern Mediterranean region experience a change in climate, to a dry period that may have last for over 150 years. The drier climate is evidenced through studies of ice cores, isotopes in stalactites, pollen samples taken from mud cores and changes in cow DNA from European breeds to breeds better able to survive dry conditions.

Inscriptions from the period indicate an increasing desperation for food. This desperation emerges from Hittite and Ugaritic records, and is a likely culprit in the collapse of these entities.

The drier climatic conditions ushered in the Late Bronze Age Collapse. During the Late Bronze Age Collapse, the ancient Near East experienced a breakdown of the major kingdoms and empires in the region. The Mycenaean kingdoms in Greece disappeared. Egypt would eventually suffer a collapse of centralized rule and the end of the New Kingdom. The Hittite Empire broke apart into smaller statelets. The Assyrian kingdom survived, but as a rump state. The Kassite dynasty in Babylonia ended. With the demise of these kingdoms, the international trade system collapsed. This archaeological dark period would last into the late 10th century BCE, before new large kingdoms were able to reformulate.

Beginning in the 16th century BCE, Egypt gained control over Canaan. Its control can be seen in the presence of strategically located Egyptian military garrisons, containing evidence of Egyptian material culture, placed along strategic trade routes. Locals in Canaan adopted some Egyptian practices, including anthropomorphic coffins and the worship of the Egyptian goddess Hathor.

Egyptian domination came at a cost to the locals in Canaan. Egyptian kings boast of taking large numbers of slaves from the region to Egypt. The region saw a decline in walled cities, population and material wealth from the Middle Bronze Age through the Late Bronze Age under Egyptian control.

During this period, in the late 13th and early 12th centuries, Egypt came under attack along its northern coast from groups of ‘Sea Peoples’. These invaders appear to have originated from the Aegean or the Anatolian coast in the Mediterranean. The map shown above, on display at the Bible Lands Museum in Jerusalem points to an Aegean origin. These groups may have established beachheads in Canaan in the late 13th century. One of the groups amongst these invaders is known in Egyptian records as the Peleset. This group appeared to settle along the coast in the southern Levant in the early 12th century.

Thus, in the early 12th century, two new rivals appeared on the Canaanite scene. The Peleset, or Philistines, in the southwestern corner. And the early Israelites in their corner of the central hill country. Cue the music: