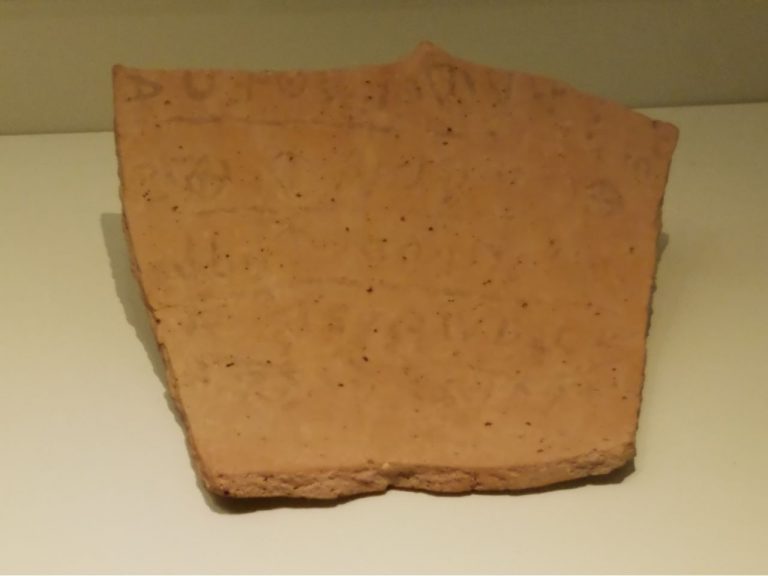 “If any of your fellow Israelites become poor and sell themselves to you, do not make them work as slaves. They are to be treated as hired workers or temporary residents among you; they are to work for you until the Year of Jubilee. Then they and their children are to be released, and they will go back to their own clans and to the property of their ancestors…Your male and female slaves are to come from the nations around you; from them you may buy slaves. You may also buy some of the temporary residents living among you and members of their clans born in your country, and they will become your property. You can bequeath them to your children as inherited property and can make them slaves for life.”

The matter of slaves may appear on an ostracon, an inscription on a piece of pottery, that was discovered at Khirbet Qeiyafa.

The Khirbet Qeiyafa ostracon, also known as the Elah Fortress ostracon, was discovered in an archaeological layer that dates to the late Iron I to early Iron IIA period, which ranged from the 11th-10th century. The ostracon contains approximately 60 letters, written on a series of lines. The actual ostracon is shown in the image above. As the letters are faint, they can be more clearly seen via the following link, in which the letters are shown in bold.

The ostracon appears to be written in a Proto-Canaanite script, the script from which the archaic Hebrew alphabet emerged. The language of the script has not been definitively determined. Based on the letters in the inscription, the language belongs within the Northwest Semitic Canaanite language family, but it could be written in the Hebrew, Canaanite, Phoenician or the Moabite language. By location, it is not likely to be written in Moabite, a language on the eastern banks of the Jordan River, leaving Canaanite or Hebrew as the most likely options.

Scholars have attempted to decipher the inscription, but attempts to do so are complicated by the faint script, lack of breaks between letters to divide the words and the uncertain direction of the writing. Thus the ranges of possibilities vary widely.

One attempt claims that it offers a social justice message about oppressing the weak. Another attempt argues that it relates to the appointing of Saul as king of Israel. Others offer much more muted attempts at decipherment, noting that words as mlk, ʿbd, špṭ (melech – king, eved – slave, shophet – judge) appear. Still others claim that the inscription contains a list of names.

Beyond the actual contents of the inscription, the inscription is notable because it demonstrates literacy in Qeiyafa in the late Iron I to early Iron IIA period. One of the possibilities for the inhabitants of Qeiyafa would be Israelites or Judahites, connected to the early Israelite and Judahite settlers in the central hill country, which included the city of Jerusalem. For Jerusalem to direct affairs at distance, including a site such as Qeiyafa, would require a degree of literacy. Evidence of literacy at Qeiyafa would support the possibility that it was ruled from a distance by a greater centralized power, offering the possibility that a King Saul or King David ruled over Qeiyafa in this period.