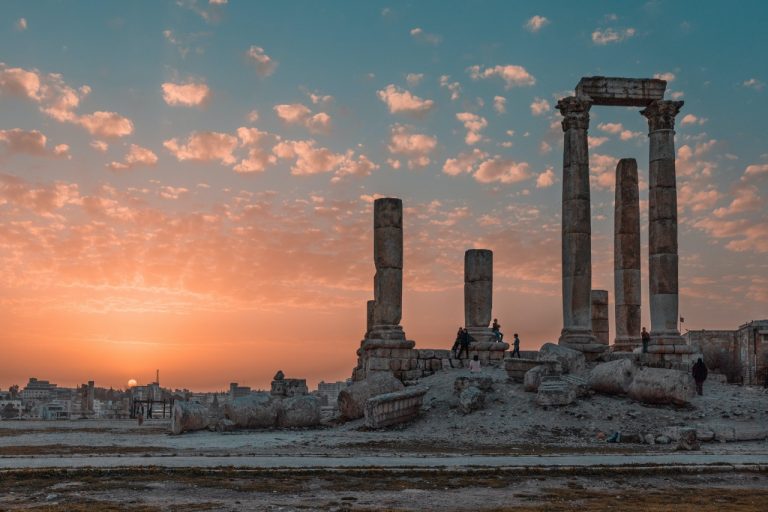 In Genesis 19, Lot and his two daughters fled the destruction of Sodom and Gomorrah and escaped to mountains where they lived in a cave. Fearing that mankind had been destroyed, Lot’s daughters conspired to become pregnant by their father Lot, and they bore the sons Moab and Ben-Ammi, the forefathers of Moab and Ammon.

In 2 Samuel 11, King David sent his forces to attack the Ammonites. His army laid siege to the Ammonite capital, Rabbah. It was there that David sent Uriah the Hittite to be killed in order for David to take Uriah’s wife Bathsheba as his own. Eventually, in 2 Samuel 12, David’s general Joab captured Rabbah’s water supply, and King David arrived to complete the conquering and plundering of the city.

During the Bronze Age and Iron Age, conditions in Transjordan mirrored conditions in the Cisjordan, to the west of the Jordan River. The region flourish during the Middle Bronze Age, declined during the Late Bronze Age, then after the Late Bronze Age Collapse around 1200 BCE, began to see a process of new states emerging. Where the Philistines and Israelites established themselves in the Cisjordan, Ammon established itself in the Transjordan plateau. There it too developed with a ruling and clerical class.

Rabbath Ammon, known today as the Amman Citadel, sat on an elevated hill above today’s Amman, Jordan. It is from this ancient city that the capital of Jordan gets its name, Amman. The hill forms an L-shape, with the bottom portion of the L running east to west on the southern edge. The city was strategically located near the King’s Highway, an important trading route connecting Egypt, the Mediterranean Coast, Arabia, Syria and Mesopotamia. Control over this route would have invited people to appoint a king to control the route and invaders to attack to seize control of the route.

Excavations at the site of Rabbath Ammon revealed that within the walls of ancient Rabbath Ammon, a tunnel was dug through bedrock to a stairway that led to a large underground chamber, portions of which stood outside the city wall. The construction and large chamber point to it having been a reservoir for the city, a reservoir needed to supply defenders attempting to hold off an enemy siege.

While this has revealed no proof on an ancient battle with David, it raises the possibility that this is the water system referred to in the Bible, where David’s general Joab is said to have captured Rabbath Ammon’s water supply.

The image above is of the Amman Citadel, site of ancient Rabbath Ammon in modern day Amman.