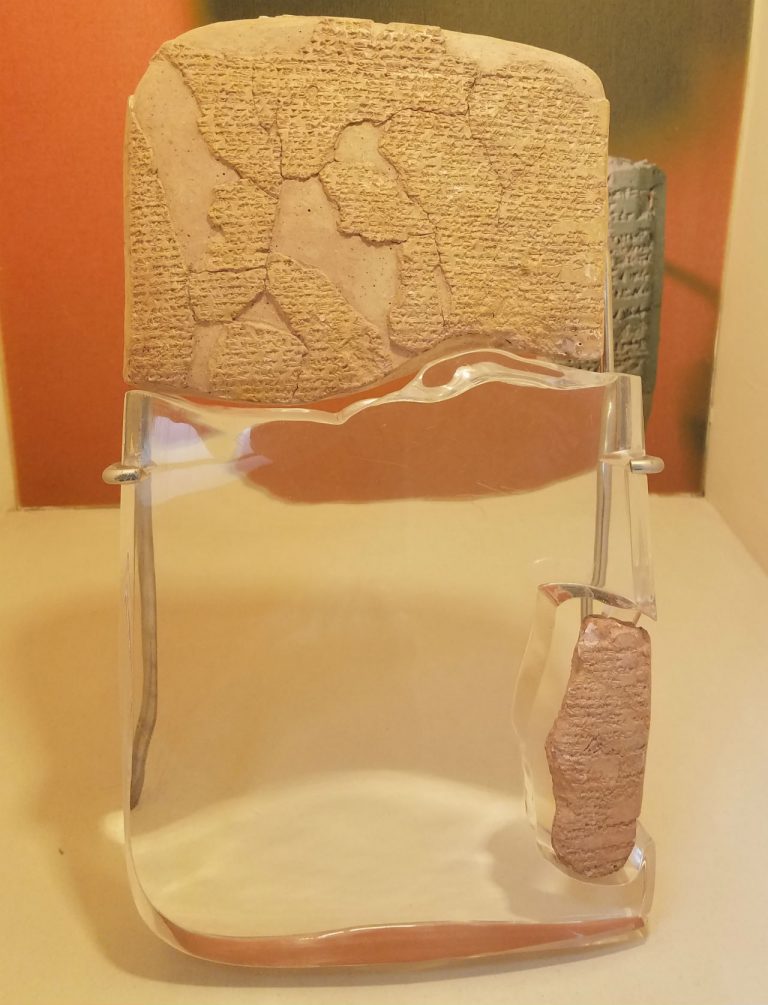 In Exodus 35, Moses repeats to Israel what materials are needed to build the tabernacle in the desert. “Everyone who is willing is to bring an offering of gold, silver and bronze; blue, purple and scarlet yarn and fine linen; goat hair; ram skins dyed red and durable leather; acacia wood; olive oil for the light; spices for the anointing oil and for the fragrant incense; and onyx stones and other gems.”

One the listed items can be translated as bronze. Bronze is an alloy of copper and tin. It was important for agricultural and military purposes, as bronze is harder than copper alone, and it could be shaped into more functional tools than stone tools.

Copper and tin were not readily available in Egypt, and they required the Egyptians to go further afield to secure them. The Egyptians mined copper in the Sinai Desert at locations such as Wadi Maghara and Serabit el-Khadim. The search for copper took the Egyptians north of the Sinai to Timnah, near today’s Eilat in southern Israel. Tin had to be imported from Anatolia, the area of modern day Turkey.

At the end of Egypt’s Second Intermediate Period, Egyptians from Thebes in southern Egypt attacked and expelled the Asian Hyksos who were ruling northern Egypt. The New Kingdom unified rule over all of Egypt, then continued their pursuit of the Hyksos into the area of Canaan.

Egypt’s New Kingdom ruler Thutmose III achieved Egypt’s greatest reach, pushing past Megiddo in Canaan and into Syria to the banks of the Euphrates River. This gave Egypt a buffer zone to protect itself from invasion and closer access to resources such as tin. It also put Egypt on a collision course with an ascendant Hittite Empire.

The competition with the Hittites culminated in the largest chariot battle in world history with the Battle at Kadesh in 1274 BCE. Over 4,500 chariots faced off against each other. The battle is recorded in Egypt in both poetic and bulletin form. These somewhat contradictory accounts tell the same basic story. At the head of the Egyptian armies, the Egyptian pharaoh Ramesses II was caught in an ambush. Only through his great personal bravery was he able to escape the Hittite chariot attack.

Ramesses II is perhaps boastful of his exploits: “I crushed a million countries by myself, on Victory-in-Thebes, Mut-is-content, my great horses…My majesty paused in valour and victory, having felled hundred thousands by my strong arm.” But the battle did not produce any great gains for either side and could be fairly judged to be a stalemate.

The end of the battle eventually led to the Egyptians and Hittites entering into a peace treaty. The Egyptian–Hittite peace treaty has been discovered in both Egypt and Anatolia, and is the only treaty from the ancient world for which both parties have been found. The treaty is preserved in Egypt on the walls at the Temple in Karnak. The Hittite treaty was discovered at Bogazkale, Turkey in central Anatolia, in a Hittite royal palace.

The great chariot battle at Kadesh was at least in part a battle for access to bronze. This battle ended in a tie, with a peace treaty to show for it.

The Hittite version of the peace treaty is shown in the image above. It is housed at the Istanbul Archaeology Museums.