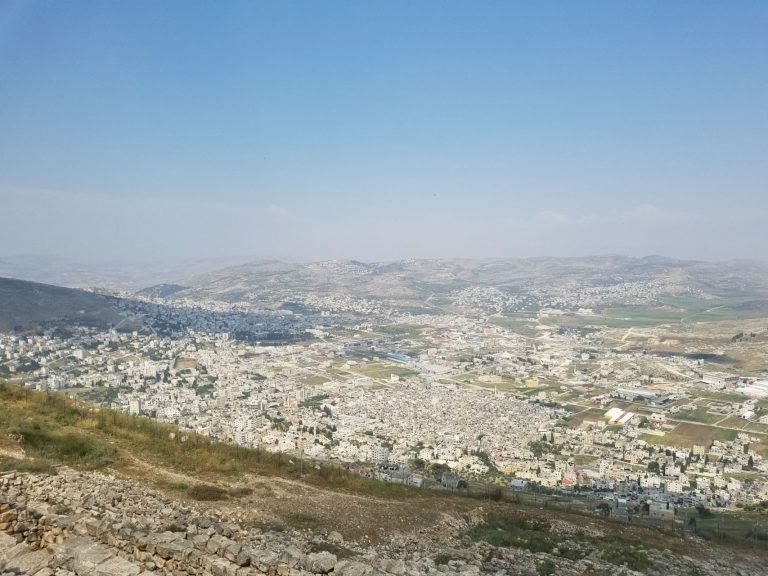 In Deuteronomy 11, Moses tells Israel that once in Canaan, their fate will be tied to their choices. “See, I am setting before you today a blessing and a curse; the blessing if you obey the commands of the Lord your God that I am giving you today, the curse if you disobey the commands of the Lord your God and turn from the way that I command you today by following other gods, which you have not known. When the Lord your God has brought you into the land you are entering to possess, you are to proclaim on Mount Gerizim the blessings, and on Mount Ebal the curses.”

In Joshua 8, this is exactly what they do. “Then Joshua built an altar in Mount Ebal to the Lord, the God of Israel, as Moses the servant of the Lord had commanded the people of Israel, as it is written in the book of the law of Moses, an altar of unhewn stones, upon which no man has lifted an iron tool”

In an archaeological survey, a team walks across an area and records finds that sit on the surface. Archaeologist Adam Zertal led a survey of the Manasseh Hill Country, the areas traditionally associated with the tribe of Manasseh. This area included parts of the northern West Bank, including Shechem and the area traditionally believed to be Mt. Gerizim and Mt. Ebal.

Mt. Ebal is a large mountain and the highest mountain in northern Samaria. On the northern eastern side, about 200 feet from the summit, Zertal unearthed a large stone structure. The pottery in the layers on site dated to the early Iron Age I, from the mid 13th century to the mid 12th century. A large percentage of the pottery was collared rim jars, which can be indicative of the early Israelites. There did not appear to be a settlement nearby, and a short wall surrounded the area.

Excavations revealed a stone structure that was roughly 24 feet x 30 feet and roughly 10 feet tall. The stones that were used in its construction were uncut field stones. Inside it was filled with stone, ash and charred animal bones. The animal bones at the site and in the fill dirt were from young male bulls, sheep, goats and fallow deer. The structure did not appear to have an entryway at the ground level, but appeared to have a long ramp that was 4 feet wide and 23 feet long that led to the top of the structure. The structure also had a shorter ledge around three of its sides.  Zertal claimed that this was a cultic site and that the structure was an altar.

The lack of a settlement, the walled off area, the large number of pots and animal remains, a structure without an entry way all point to this being a cultic site. But Zertal took the additional step of claiming this was none other than the altar Joshua was said to have built in the Book of Joshua.

Zertal built his claim on a number of factors. The young bull, sheep and goat animal bones are either those listed in Leviticus 1 or the fallow deer, which is considered a kosher animal. The uncut stones and ramp instead of steps are reminiscent of Exodus 20. “Make an altar of earth for me and sacrifice on it your burnt offerings and fellowship offerings, your sheep and goats and your cattle. Wherever I cause my name to be honored, I will come to you and bless you. If you make an altar of stones for me, do not build it with dressed stones, for you will defile it if you use a tool on it. And do not go up to my altar on steps, or your private parts may be exposed.” The thin ledge around the altar corresponds to a Second Temple era Mishnah, in tractate Middot. The site appears to be abandoned abruptly in the mid 12th century, just as the Bible says that Shilo became the premier Israelite cultic site.

Zertal’s claim has been hotly disputed. The explanation of the ledge based on a Mishnaic source that is 1,000 years older could invalidate that as proof. Others claim that the site is not an altar, but is a farmhouse or a watchtower, and the ramp simply a collapsed wall. These suggestions are not ironclad. The lack of bones from pack animals question its identification as a farmhouse. The suggestion that it is a watchtower is problematic, as it would be more sensible for a watchtower to be set closer to the mountaintop or opposite a prominent road.

For many, his suggestion that it is specifically Joshua’s altar puts his claim beyond the pale. If Joshua’s altar, it would have made more sense for it to be visible from the site that is assumed to be Mt. Gerizim. And for others, it is too much to claim it belongs to a figure for whom there is no scientific proof yet.

The image above is of Mt. Ebal, taken from Mt. Gerizim, with Shechem, modern day Nablus, in the valley between the two.

For a visual of the structure, see this link: